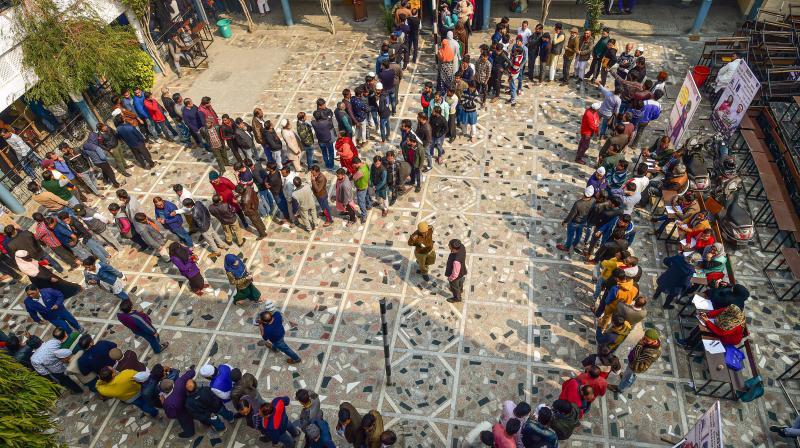 Voters form a love sign as they wait in queues to cast their votes at the Shaheen Public School polling station in the Shaheen Bagh area of New Delhi, which has been witnessing a peaceful protest against the Citizenship Act for several weeks, during the Delhi Assembly elections, in New Delhi, Saturday, Feb. 8, 2020. (PTI Photo)

Notably, the highest percentage of voting occurred in three Muslim-dominated constituencies, which points to a vigorous from the community to the new citizenship law brought in by the BJP government at the Centre.

Voting continued in some places even after 6 pm to accommodate latecomers.

Among the exit polls, Times Now-Ipsos exit polls predicted 44 seats for AAP, a sharp drop from the 67 it won in 2015 but comfortable enough to bid for power again in the 70-member Assembly. The BJP was tipped to get 27 seats.

TV9 Bharatvarsh-Cicero predicted 54 for AAP, 15 for BJP and 1 for Congress.

Clearly, there's no prospect of a sharp upturn in the Congress tally. The party drew a blank in 2015.

The notable point on a predictable day was the high voting seen in three minority-dominated seats: Mustafabad, Matia Mahal and Seelampur, which recorded the highest voter turnout on Saturday.

According to the data shared by officials, Mustafabad in northeast Delhi recorded 66.29 per cent till 5 pm; Matia Mahal in old Delhi, the area where saw anti-Citizenship Amendment Act (AA) protests are taking place, recorded 65.62 per cent; and Seelampur recorded 64.92 per cent.

Long queues were seen at Shaheen Bagh, the venue of a continuing protest against the CAA, right through the day.

There were several reports of ' names missing from the voters list, notably at Shaheen Bagh.

"A few voters could not cast their votes in Shaheen Bagh as their names were either found deleted or incorrect in the list," said a poll staffer on duty.

Waqil Malik, a voter in Seelampur constituency, said his mother Zarina (62) could not vote since her name was missing. "My mother's name was there in the list in the last Lok Sabha polls. I have no idea why her name was deleted," Malik rued.

In Krishna Nagar constituency, a 34-year-old resident of Khureji Khas, Fallahuddin Falahi, claimed that he could not find his name in the electoral rolls. "I have a voter ID card. I voted in the Lok Sabha elections and the last Delhi elections. This is the first time I could not vote," he said.