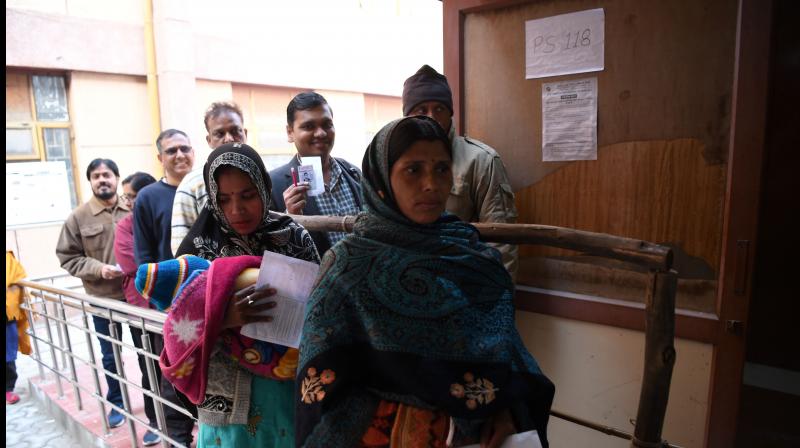 People queue up to cast their votes in the Delhi Assembly elections at a polling station in New Delhi on February 8, 2020. (AFP)

New Delhi: Polling for the 70-member Delhi Assembly got underway on Saturday morning after a bitter campaign.Over 1.47 crore people are eligible to vote to decide the fate of 672 candidates. Polling began at 8 am and will end at 6 pm.
Police and paramilitary personnel are keeping an "extra vigil" in sensitive areas like Shaheen Bagh, Jamia Nagar and Seelampuri.

Ahead of the voting, Delhi chief minister Arvind Kejriwal tweeted, "Please go to cast vote. A special appeal to all the women - As you shoulder the responsibility at home, likewise, the responsibility of the country and Delhi is on your shoulders."
"All of you women do cast your vote and take along men with you. Do discuss with men about voting for whom will be right," the chief minister added.

The Aam Aadmi Party (AAP) is hoping to repeat its stellar performance of the last assembly polls when it won 67 of the 70 seats. The BJP, which bagged all the seven seats in Delhi in the 2019 Lok Sabha poll, is aiming to dislodge the AAP, while the Congress is seeking to better its performance than last time when it drew a blank in the assembly polls.

If surveys are to be believed, the Aam Aadmi Party (AAP) is all set to return to power in the national capital where polls to all 70 Assembly seats will be held on Saturday. But if one goes by grandstanding, then the BJP appears set to usher in a new chapter in Delhi and forming the city-state’s government on its own after 22 years.

Two surveys, one released on Wednesday and another earlier on Monday, clearly suggest that the AAP will not be able to retain all the 67 seats it won in the 2015 elections, but will be able to form a government on its own. They give 10-14 seats to the BJP. But home minister Amit Shah has claimed his party will win more than 45 seats. The saffron party won in just three constituencies in 2015; the Congress drew a blank.

According to the ABP News-CVoter survey, Arvind Kejriwal’s AAP is predicted to win 42-56 seats. The IPSOS-Times Now survey says the AAP is likely to get anything between 54 and 60 seats, the BJP 10-14 seats, while the Congress may draw a blank or win, at best, two seats.

Tight security measures have been put in place across the city, especially sensitive areas like Shaheen Bagh, for peaceful polling in which Delhi’s 1.47 crore voters will decide whether Kejriwal gets another term as chief minister for the development work done and promised, or the BJP, which campaigned aggressively on the “anti-Shaheen Bagh” nationalism pitch, will get a he last two weeks of campaigning for the country’s most prestigious electoral battle since the Lok Sabha polls in April-May 2019 saw the BJP roping in almost all Union ministers, 11 chief ministers and 200-odd MPs to hardsell its nationalistic narrative to garner the support of voters to unseat Kejriwal. Many BJP leaders even tried to polarise voters along communal lines.

To address the Hindu vote bank, the chief minister even recited the Hanuman Chalisa at a recent show organized by a news channel where he declared himself to be a diehard follower of Hanuman. On Friday, he along with his family offered prayers at the famous Hanuman temple in Connaught Place. After his visit to the temple, he tweeted: “Sought blessings of Hanumanji at famous Hanuman temple at CP. Bhagwanji said — ‘You are doing good work. Continue serving people like this. Leave the outcome to me, all will be fine’.”

The Delhi polls are significant as they will also set the stage for elections in six states in the next 18 months — Bihar in the second half of this year, and Kerala, Tamil Nadu, Puducherry, West Bengal and Assam in 2021. These polls are an acid test for the BJP which in the recent past lost elections in Jharkhand and was unable to form the government in Maharashtra after its ally Shiv Sena joined hands with the Congress and NCP. In Haryana, the party could form government only after taking the support of Dushyant Chautala’s JJP.

For Kejriwal, these polls are not only a test of his credentials as the head of a city government, but also important for the political future of the AAP, whose voteshare dropped from 54 per cent in 2015 Assembly polls to just 18 per cent in last year’s Lok Sabha polls. The  AAP, which swept the 2015 Assembly polls, lost all three municipal bodies in the city to the BJP in 2017, in which it got just 26 per cent votes, about 10 per cent less than the saffron party.

This time, the AAP is again facing a tough contest from the BJP in 10 seats which it had won by a margin of less than 10 per cent votes in the earlier polls. Of these seats, the victory margin of the AAP was even less than five per cent in Shakurbasti, Najafgarh, Lakshmi Nagar and Krishna Nagar. The party, however, seems to be having a clear edge over the BJP in all the 12 reserved seats it had won in the previous polls.

The 2020 election also poses a big challenge for the Congress, which could not win even a single seat in the last Assembly elections. The party came second only in Badli, Mangolpuri, Matia Mahal and Mustafabad. But the grand old party surprised one and all  by securing four per cent votes more than the AAP across the seven seats in the last Lok Sabha elections.

Both the AAP and the BJP had been trying hard to seek support of Purvanchali voters — migrants from eastern Uttar Pradesh, Bihar and Jharkhand — who comprise about 30 per cent of the total electorate. The AAP has even gone to the extent of promising to get Bhojpuri included in the Eighth Schedule of the Constitution.

India likely to have its third wave peak in mid-August: Experts