Defining the changed approach of his government towards the region, the PM reiterated he has ensured that Delhi is very close to them. 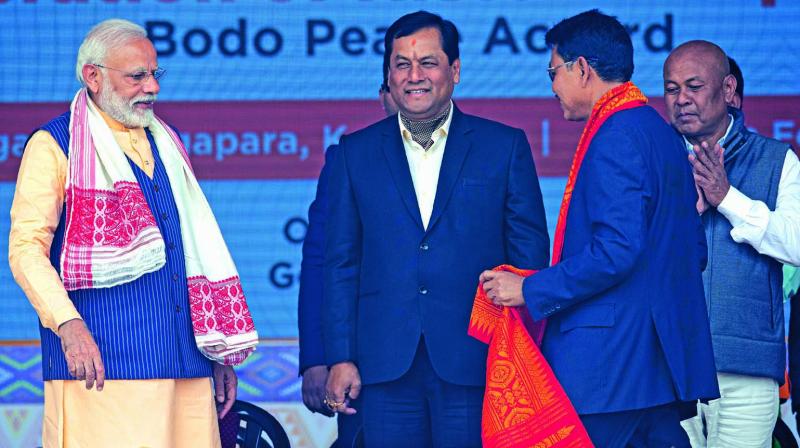 Prime minister Narendra Modi stands as NDFB chief Ranjan Daimari walks to greet him during an event to celebrate signing of a peace accord with the Bodo rebel group, National Democratic Front of Bodoland, in Kokrajhar on Friday. (Photo: AP)

Guwahati/Kokrajhar: Prime Minister Narendra Modi said here Friday that the new Bodo peace accord would bring in peace and development in Assam. Saying it was now time to work together, while addressing a huge public rally at the Bodo Territorial Area District (BTAD) of Assam in Kokrajhar, Mr Modi promised that the Citizenship (Amendment) Act would not harm their interests. “A canard is being spread that lakhs of people will come from outside after the CAA’s enactment. Nothing of that sort will happen,” he said.

The Prime Minister also urged Kashmiri militants, other banned outfits in the Northeast and the Naxalites to lay down their arms, join the national mainstream and “celebrate life”. He also attacked the previous non-BJP governments for “procrastinating” on a resolution of vexed issues that alienated people and made them lose their faith in democracy and the Constitution.

“Those still with bombs, guns and bullets in Kashmir, other parts of the Northeast, and Naxalites... Come back. Join the mainstream. Wapas laut aiye aur jeevan ka jashn manaiye (come back and celebrate life,” he said.

Mr Modi said he was confident that the accord signed by the Centre, the Assam government and the Bodo groups will bring permanent a peace, unlike previous accords inked with the insurgents in 1993 and 2003.

The Prime Minister, who was visiting Assam for the first time after Parliament passed the new citizenship law, had earlier cancelled two visits, including one with Japanese PM Shinzo Abe, citing various reasons.

Acknowledging the rally as one of the largest public gatherings, Mr Modi said the national interest has been the primary concern of his government. “When the national interest is your primary concern, you can’t let situations persist as they are. The entire issue of the Northeast was serious and we worked on it with a new approach. We understood the aspirations and emotional context of different regions of the Northeast. We conversed with them and made them feel like our own. This has helped reduce extremism. Earlier, there were about 1,000 killings in

Northeast due to extremism but today, on an average, the situation is normal and peaceful,” he said, reaffirming his commitment to bring an end to violence.

Defining the changed approach of his government towards the region, the PM reiterated he has ensured that Delhi is very close to them. “Earlier, this region was thought to be far from Delhi. Today, Delhi is very close to you and hears you with care. We’ve ensured that once every 10-15 days, a Central minister will visit the Northeast, will spend the night, talk to people and solve their problems. Our ministers spent a lot of time here and solved a lot of problems. My government is taking direct feedback and are making the right decisions,” said the Prime Minister.

He said: “Thousands of Northeast people lived like refugees in their own country in the past. Now, they are being rehabilitated with full facilities. The people of India were afraid of coming here at one time. Now, they’re pitching it as the next tourist destination. Did this change come suddenly? No. Earlier, the states of Northeast India were looked upon as recipients. Now  they are considered as engines for development.”

He also pointed out that when the BJP came to power most states in the Northeast was under the armed forces. “After we came to power, most regions of Tripura, Mizoram, Meghalaya, and Arunachal Pradesh are free from AFSPA. Earlier, businessmen did not agree to invest in the region, but that has also changed. There was a fight for a homeland for a long time in the Northeast. Today, they accepted India as their homeland,” said Mr Modi.

Assuring the Bodo leadership that New Delhi will fulfil all commitments, Mr Modi said: “We’re also working on education, skill, and sports for the youth of the Northeast. Apart from this, we’ve also built new hostels for Northeast students in Delhi and Bengaluru. New railway stations, new railway routes, new airports, new waterways, and Internet connectivity — the amount of work that is being done today is unprecedented.”

The PM lauded the efforts of the All Bodo Students Union (ABSU) and National Democratic Front of Bodoland (NDFB) for their efforts in restoring peace in Western Assam. Earlier, ABSU president Pramod Boro also expressed gratitude to the Prime Minister for his government’s initiative to bring an end to the atmosphere of violence that rocked the community for the past three decades.