Modi said it was an 'extortionist syndicate' and not 'Didi', as Banerjee is fondly called, that was running the state. 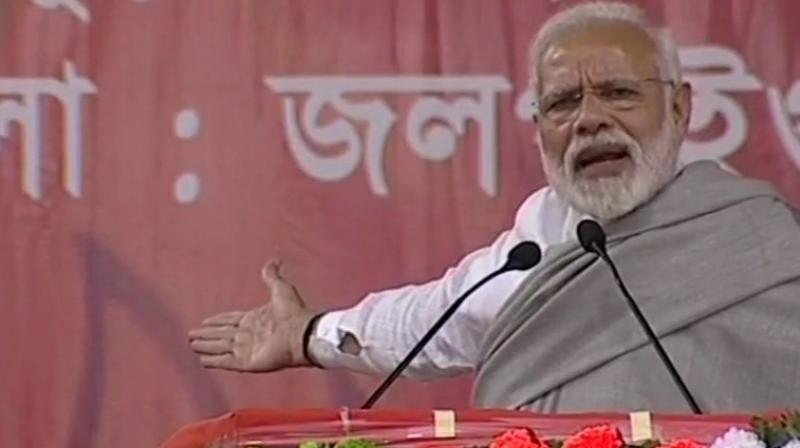 Prime Minister said it was for the first time that a chief minister had staged a dharna to protect the fraudsters who looted lakhs of poor people. (Photo: ANI | Twitter)

Churabhandar: Prime Minister Narendra Modi Friday launched a scathing attack on the Mamata Banerjee government, claiming it had defamed the soil of West Bengal and rendered its people helpless.

Addressing a well-attended BJP rally here in North Bengal's Jalpaiguri district, Modi said it was an "extortionist syndicate" and not 'Didi', as Banerjee is fondly called, that was running the state.

"Those who got power in Bengal in the name of 'Maa, Maati, Manush' after unseating the Left have also adopted the culture of violence. They have defamed the soil of Bengal and rendered its people helpless," Modi said attacking TMC government.

Assailing Banerjee for the sit-in she staged against the attempted questioning of Kolkata police commissioner Rajeev Kumar by the CBI in the Saradha chit fund scam case, the prime minister said it was for the first time that a chief minister had staged a dharna to protect the fraudsters who looted lakhs of poor people.

"This chowkidar will spare neither the perpetrators of chit fund scams nor those protecting them," he asserted.

Striking an emotional chord with the locals at his hugely attended public meeting here at Mainaguri on Friday, Prime Minister Narendra Modi said, “You people grow tea...I make tea. And I wonder why Didi (Mamata Banerjee) is not fond of chaiwallahs.”

In an apparent reference to Chief Minister Mamata Banerjee, an upbeat Prime Minister Modi also said, “Come to Jalpaiguri and see the support for BJP.”

"TMC is the Communist part two,” he said.

Prime Minister Modi, who was speaking after inaugurating the new High Court circuit bench in Jalpaiguri, said, “Congress, Trinamool Congress or Left is not concerned about the people’s welfare. All the facilities provided to the people of Bengal are being facilitated by the Central government.”

Stating that Jalpaiguri circuit bench of Calcutta High Court would benefit the local population, Prime Minister Narendra Modi said, “Brothers and sisters, 20 years ago this project was initiated but your demand for ages has finally been fulfilled today.”

“Now the people of Jalpaiguri will get justice in Jalpaiguri itself. They won’t have to go to Calcutta High Court for legal help. You will now get those facilities right here only,” he said.

Prime Minister Narendra on Friday also laid the foundation stone for the four-laning of the Falakata–Salsalabari section of NH-31 D. This 41.7-km long section of the national highway will be constructed at a cost of about Rs 1,938 crore within 2.5 years.