There was no immediate reaction from the police on Chaudhury’s claims. 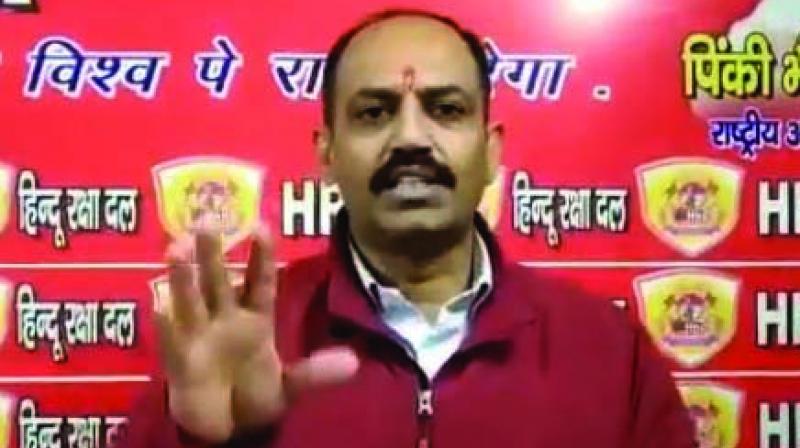 The video, which was posted early on Monday and has gone viral since, shows a man identifying himself as Pinki Chaudhary saying, “For several years, JNU has been a bastion of communists and we will not tolerate it. Hindu Raksha Dal, Bhupendra Tomar, Pinki Chaudhury take the responsibility of what has happened in JNU... All of them were our volunteers. Those who cannot do such work for Mother India don’t have the right to live in this country”.

Mr Chaudhary also says in the video that those who resort to “anti-national activities” will be treated in the same way that JNU students and faculty were.

“We are always ready to sacrifice our lives for Mother India. We will not tolerate anyone who speaks against the religion,” he adds.

There was no immediate reaction from the police on Mr Chaudhury’s claims.

Talking with this newspaper, Sanket Katara, the spokesman and legal advisor of the Hindu Raksha Dal, said that the group is proud of its “JNU adventure”.

“This place (JNU) had become intolerably anti-national. There were student rallies in favour of Parliament terror attack convict Afzal Guru and in favour of the freedom of Kashmir from India. These activities are enough to boil any true nationalist’s blood. We decided that enough was enough and planned to teach JNU people a lesson,” Mr Katara said.

He said that the Hindu Raksha Dal is a registered organisation that is devoted to protecting “Hindu interests” in India.

“Though we have pan-India network, we largely operate in the National Capital Region. We have two offices, one in Delhi and other in Ghaziabad. There are over one lakh active members of the group,” he told this correspondent.

The Hindu Raksha Dal was reportedly formed in 2013 in Ghazibabad. It shot to limelight in 2014 when its members barged into Delhi chief minister Arvind Kejriwal’s office and indulged in vandalism. Later, the group was said to be involved various cow vigilante incidents in Delhi and UP.

The group reportedly has no direct connection with the BJP, RSS or ABVP. “But we are ideological children of these organisations. We support BJP candidates during elections and many of our cadres are RSS workers too,” said Mr Katara.

He denied that the group is funded by any political party or business house and claimed that members of the group donate money themselves to run the organisation.

“We all are employed and contribute some share from our own salaries,” he said.

The Hindu Raksha Dal doesn’t have a portal but many of its members run Facebook pages to advertise the group. “Plus, we run membership drives on Facebook,” said Mr Katara.

Reminded on JNU violence and whether the group believes in violent method, Mr Katara said that the group will and does “resort to methods that suit the purpose of Mother India.”

When asked what could be next on their agenda after JNU, Mr Katara said in a terse tone, “Whoever works against the interest of the nation. You in media will get to know soon”.

The JNUSU has accused the RSS-affiliated ABVP volunteers of attacking students and professors on Sunday in which more than 35 were injured.