When asked about the matter, Indian Government sources pointed out that the Norwegian Ambassador had already clarified on the matter. 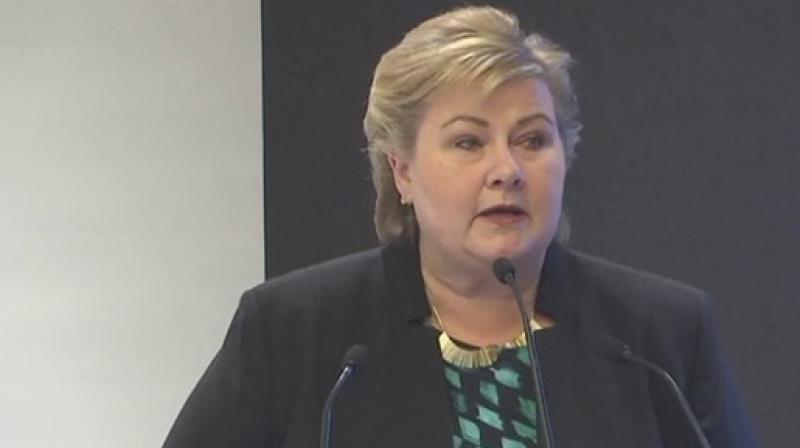 New Delhi: After a controversy broke out on Monday over certain remarks made at an event in New Delhi by visiting Norwegian Prime Minister Erna Solberg in which she indicated that Norway may be ready to mediate between India and Pakistan if there was a possibility, Norwegian ambassador Nils Ragnar Kamsvåg tweeted that his country’s Prime Minister “has not offered to mediate between India and Pakistan” on the Kashmir issue and that neither has Norway been requested to mediate. The Norwegian PM however did say clearly that as per Norway’s policy, any peace initiative in which it mediates has to be requested for. It may be recalled that India’s consistent stand is that the Kashmir issue is a bilateral one between India and Pakistan and that there can be no third-party intervention. When asked about the matter, Indian Government sources pointed out that the Norwegian Ambassador had already clarified on the matter.

The Norwegian PM also said that the Norwegian Government had no role in the recent visit of former Norwegian Prime Minister Kjell Magne Bondevik — who she described as a “private citizen” — to the Kashmir valley, adding that he had gone there as part of an initiative after an invitation. Speculation had been mounting for the past couple of months when, as per reports from Srinagar in November last year, former Norwegian Prime Minister Bondevik  had visited the Kashmir Valley and had met top Hurriyat leaders Mirwaiz Umar Farooq and Syed Ali Shah Gilani back then. Mr. Bondevik was also reported to have subsequently visited PoK. Speculation had raged then whether the meetings could be part of any track-two diplomacy.

In response to a question, Norwegian PM  Erna Solberg said, “Nobody from the outside can create peace ... So if there is a movement in India and Pakistan for ... talks together, of course we and I’m sure there would be other countries that would say that we can help in mediating if there is a possibility but it has to be those who are part ... (of) the conflict. But both Pakistan and India are big enough countries to make sure that they decrease tension without help from the outside.”

The Norwegian PM added, “Our Government policy is very clear. If we are called to help somewhere they have to ask for it. Initiatives like that do not come from the outside.” On whether a military solution could solve the Kashmir issue, she said, “I personally don’t believe military solutions solve problems. I believe in peaceful solutions. It has to be Pakistan and India together who find the time for when they want to start to talk about things.”

In a tweet later, the Norwegian Ambassador said, “PM @erna_solberg has not offered to mediate between India and Pakistan as has been erroneously reported. Norway has neither been asked nor offered to mediate.”