Apsara Reddy has been appointed as National General Secretary of All India Mahila Congress (AIMC). 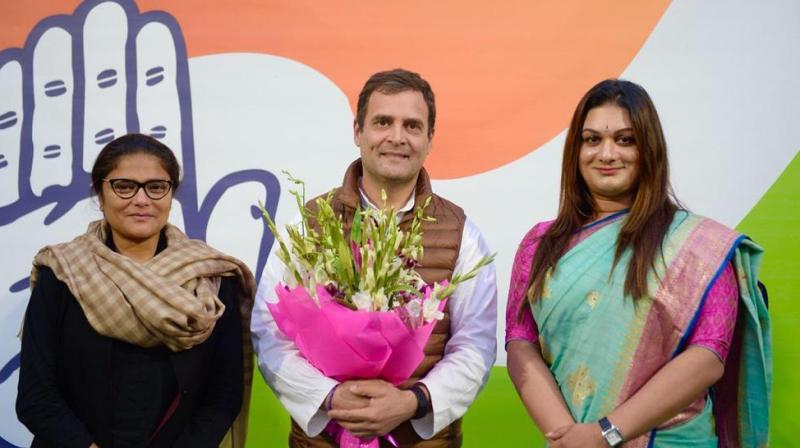 Apsara Reddy was inducted into the party in the presence of Rahul Gandhi and Lok Sabha MP and AIMC president Sushmita Dev on Tuesday. (Photo: Twitter | @INCIndia)

New Delhi: Apsara Reddy, a well-known transgender journalist and activist, has been appointed as the National General Secretary of All India Mahila Congress (AIMC) by Congress president Rahul Gandhi.

Apsara was inducted into the party in the presence of Rahul and Lok Sabha MP and AIMC president Sushmita Dev on Tuesday.

As a transgender woman, Apsara has been involved in social activism since her college days and has also taken up high-profile cases of child rape in Tamil Nadu.

Her active voice on social issues and her brand of journalism initially saw her joining the BJP after meeting party chief Amit Shah. However, Apsara left the BJP within a month, claiming that the party was "regressive and has no place for free-thinking individuals."

In her new role, Apsara aims to work towards women's economic empowerment, fighting against social injustices, helping women find their human rights and help contribute to the Congress party's manifesto with women-centric policies.

"Over 40 per cent of Indian women, according to the Human Development Report's Gender Inequality Index, suffer abuse, neglect or violence at the hands of their husbands or family members," she said.

"Girl child rape is at an all-time high. To protect women from crimes and abuse we need to embolden their voices, frame policies that push for intervention and strengthen our social justice mechanisms," she noted.

With regards to the Transgender Bill, Apsara said the need of the hour for the community is to bridge the inequality meted out to them. "What the community truly needs is education and equal opportunity. This is a good starting point for mainstreaming," she added.

Laying out her plans as the newly-appointed general secretary of AIMC, Apsara said, "I will meet a cross-section of women to address issues pertaining to their rights. This coming election I will campaign vociferously against the fascist BJP that drives a coloured agenda that reduces people to what they eat, how they pray and how they love."