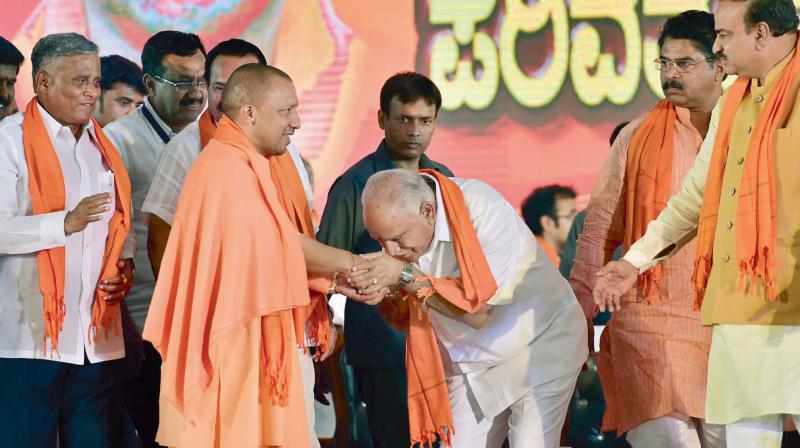 Bengaluru: BJP’s emerging mascot and Uttar Pradesh chief minister Yogi Adityanath on Sunday trained his guns on Karnataka chief minister Siddaramaiah, who had recently asserted that he too was a Hindu.

Addressing the BJP’s Parivarthana Rally at Vijayanagar in Bengaluru on Sunday, Mr Adityanath said the CM had made the turnaround seeing the growing popularity of Hindu ideology in the state.

“He (Siddaramaiah) sho-uld realise that Hinduism is a way of life in India and not merely the name of a caste or religion. It is basically a culture,’’ he said.

“During the tenure of the previous BJP regime, the government had introduced the Anti-Cow Slaughter Bill in the Karnataka Assembly. If he is a Hindu, why did he and the Congress oppose the bill? Now, with the Assembly elections appro-aching, he has started di-viding castes in the state,” remarked the UP CM.

Drawing a parallel between UP and Karnata-ka, Mr Adityanath hinted that the issue of Hanu-man Jayanthi, which had become controversial a few months ago after the Congress government banned a procession in Hunsur in Mysuru, may play a dominant role during the Assembly elections here. “Like Uttar Pradesh is the birthplace of Lord Rama, Karnataka is the birthplace of Lord Hanuman. So, Hanuman Jayanthi is a great issue here as everyone celebrates the day. Like Rama in UP, it is Hanuman in Karnataka,’’ he said.

Taking a dig at the Congress government, the UP CM said law and order had completely collapsed. Earlier, riots used to take place in UP, but after the BJP took over, the government has not allowed any riot to happen, he said.

There was a lot of development activity taking place in the country, which the Congress government here was hardly able to comprehend. During the tenure of the previous NDA government, the state had got the Bengaluru International Airport and the Metro project and now, it had the Smart City project. If a government, which thinks on similar lines like the Centre has to be installed in the state, it was necessary to vote for the BJP, he added.