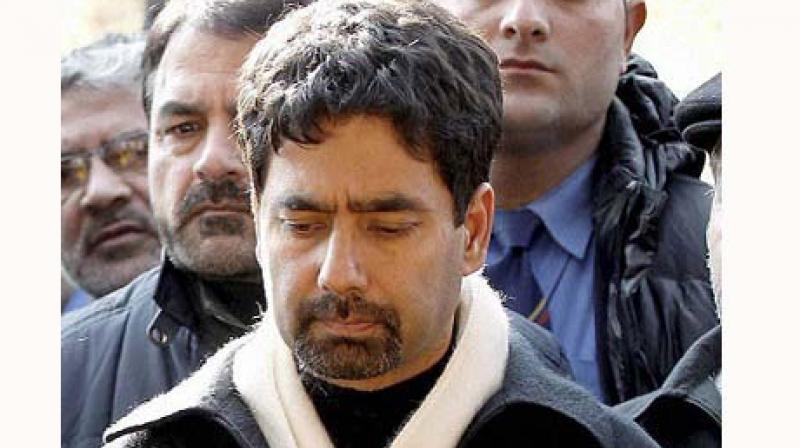 Srinagar: Tassaduq Hussain Mufti, the cinematographer brother of Jammu and Kashmir Chief Minister, Mehbooba Mufti, on Saturday formally joined the ruling Peoples’ Democratic Party (PDP) and pledged to “bring peace and prosperity to the State” and ensure “common people and VIPs walk together.”

Mr Hussain announced his decision to join the ruling party at a rally organised here to commemorate the first death anniversary of its founder and his father Mufti Muhammad Sayeed. He said, “I’m joining the PDP not because being the son of late Mufti Sahib but only after I’m convinced and inspired by the amount of work the PDP has done for Jammu and Kashmir and its people.”

The 45-year-old Mufti may be the party’s candidate to contest the election on Anantnag Lok Sabha seat wherefrom his sister Ms. Mufti was elected in the 2014 elections, the party sources said. Till the bypoll is held, he is likely to be assigned ‘immense responsibility’ and given important party work in the PDP, the sources said. He is the only son among the four siblings.

Mufti, an American Film Institute graduate, who has lensed Bollywood blockbusters like Omkara and Kaminey, had attended a meeting of the PDP’s extended core group in January last year, giving credence to reports that he has been successfully persuaded by the family and some close associates of his late father to join active politics and supplement the effort aimed at taking his (Mr. Sayeed’s) ‘mission’ forward. However, it took him almost one year to do it actually as he was busy and waiting for the completion of a couple of Bollywood projects he was associated with.

He after announcing to join the PDP formally said that he remained aloof from politics all his life. “But today I have joined the PDP officially and it is a very important day of my life. I will walk with you and take your aspirations along,” he said, adding that he dream was to clean up politics in Kashmir. Mr. Hussain had during the lifetime of his father repeatedly said that he is not interested in politics. His mother Gulshan Nazir Ara when asked about it had in an interview said, “Wherever he is, he should be happy.”