According to an official spokesperson, polling began at 8 am in all the 51,687 booths set up across the state. 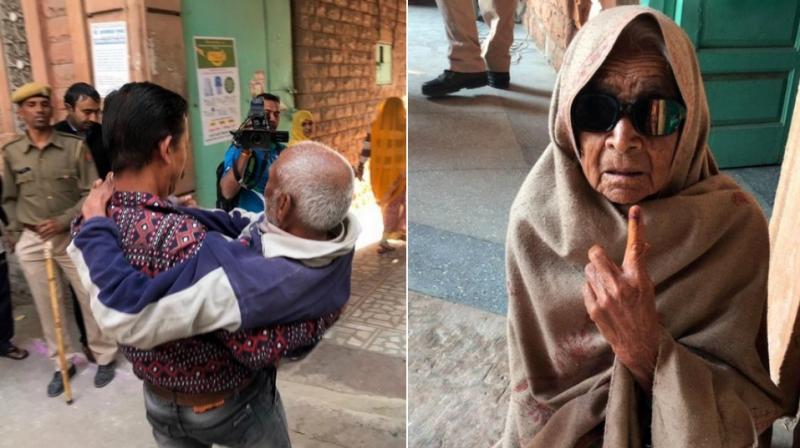 The outcome of the elections in Rajasthan, Telangana, Madhya Pradesh, Chhattisgarh and Mizoram is expected to set the tone for the Lok Sabha contest next year. (Photo: ANI)

Jaipur: Polling is underway for 199 Assembly seats out of the 200 in Rajasthan, a key state which the BJP is fighting to retain.

According to an official spokesperson, polling began at 8 am in all the 51,687 booths set up across the state.

The election in Ramgarh constituency of Alwar district was put off following the death of Bahujan Samaj Party candidate Laxman Singh.

The results will be out on December 11, along with those from the other four states which saw Assembly elections in the past few weeks.

The outcome of the elections in Rajasthan, Telangana, Madhya Pradesh, Chhattisgarh and Mizoram is expected to set the tone for the Lok Sabha contest next year.

Raje, who is the BJP's chief ministerial candidate, is fighting against veteran BJP leader Jaswant Singh's son Manvendra Singh in Jhalrapatan, the constituency she has represented since 2003.

Manvendra Singh switched to the Congress just before the election, making the fight tougher for Raje this time. She had won 63 per cent of the votes cast in 2013, winning the seat by a margin of 60,896.

Tonk, with a sizeable Muslim population, is a keenly-watched contest between Sachin Pilot and BJP candidate and Rajasthan Transport Minister Yoonus Khan, who is the saffron party's only Muslim face in the elections.

The Bharatiya Janata Party (BJP) had initially fielded sitting MLA Ajit Singh Mehta in Tonk. But in a change of strategy, the party dropped him and sent Khan to take on Pilot.

This is a maiden assembly election for Pilot, a two-time MP who is seen as a chief ministerial possibility if the Congress wins.

In about 130 constituencies, the contest appears to be mainly between the BJP and the Congress.

In the current House, the BJP has 160 seats and the Congress 25.

Discus gold medallist in the 2010 Commonwealth Games Krishna Poonia is the Congress candidate in Sadulpur.

Jat leader Hanuman Beniwal is a concern for both the parties. He founded the Rashtriya Loktantrik Party and has fielded 58 candidates.