Kushwaha is considered a strong Koeri leader with the backing of around 10 per cent voters in Bihar. 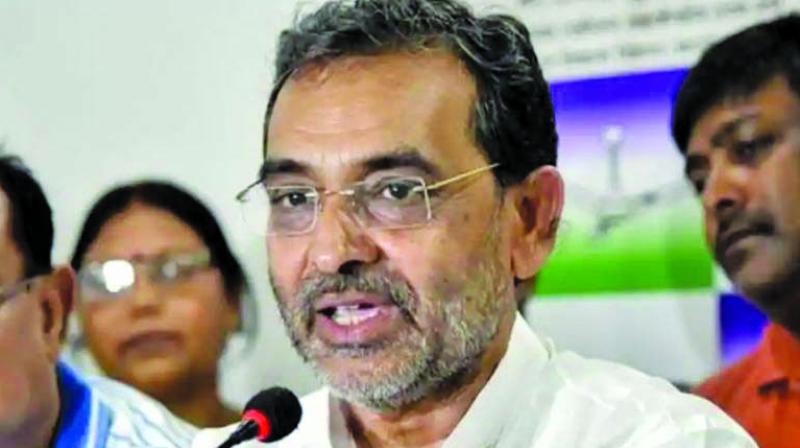 Mr Kushwaha, who has been publicly expressing his unhappiness about being sidelined by BJP, was expected to make an announcement regarding his future course of action during his party’s rally in Motihari on Thursday.

He said, “The Ayodhya issue is being raked up to polarise voters ahead of 2019 general elections. We are not opposed to the construction of temples and mosques, but this is not the work of political parties. We should concentrate on building good schools and provide better education facilities for the people. Ayodhya issue being used before the Lok Sabha elections gives rise to the suspicion that BJP, being the largest party of the coalition, wants people to forget about unemployment and other important issues.”

The statement is likely to cause rumblings within the NDA, especially the BJP, which has been maintaining silence on the issue of Mr Kushwaha’s demand for “respectable” seat sharing. He has been upset with BJP for giving more weight to Nitish Kumar and ignoring his party while finalising seat-sharing formula. He has been demanding to contest on more than three seats in Bihar.

Mr Kushwaha is considered a strong Koeri leader with the backing of around 10 per cent voters in Bihar. Observers say that RLSP has a significant voter base in around 20-25 Assembly constituencies in the state.

Political analysts are of the opinion that Mr Kushwaha quitting NDA could upset the political arithmetic in Bihar before the 2019 general elections.

There is a buzz that Mr Kushwaha may meet Congress president Rahul Gandhi next week and then take a decision whether to continue in NDA or quit.

RLSP sources said that some senior party leaders have also been in touch with opposition leader Sharad Yadav, who wants Mr Kushwaha to join the Mahagathbandhan.

Mr Kushwaha also launched a frontal attack on Bihar government, alleging that chief minister Nitish Kumar has failed in his promises to maintain law and order and provide better education facility to poor people of the state.

He said that his party’s alliance was with BJP and LJP at the Centre but not with JD(U).