Over 2,000 candidates are in the fray for 199 Assembly seats in Rajasthan. 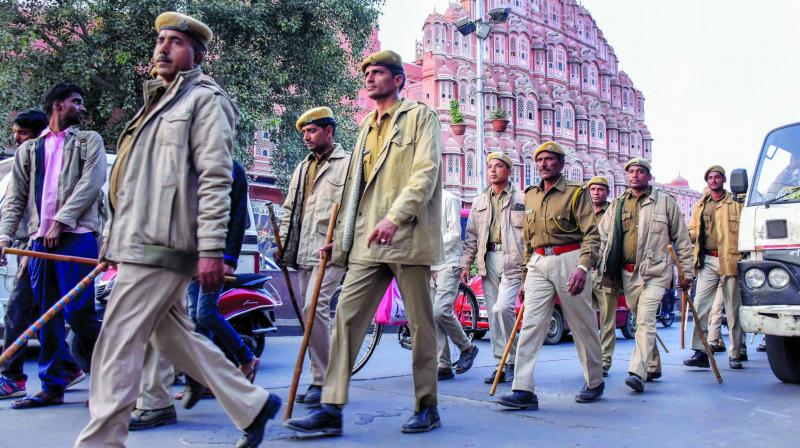 Police personnel conduct a march in front of Hawa Mahal on Thursday ahead of Rajasthan polls. (Photo: PTI)

Jaipur/Hyderabad: Rajasthan and Telangana will go to polls on Friday to elect new Assemblies after a high-decibel election campaign that saw war of words among contending parties.

Over 2,000 candidates are in the fray for 199 Assembly seats in Rajasthan, where polling Friday will determine whether the BJP bucks anti-incumbency and an increasingly aggressive Opposition to return to power.

In Rajasthan, votes will be cast at 51,687 polling booths, 259 of them managed exclusively by women officials and security personnel. It is seen as a straight fight between the Bharatiya Janata Party and the Congress for about 130 seats.

In other constituencies, groups like the BSP and rebels who are contesting against official party candidates may queer the pitch. If the Congress wins, it is expected to pick between former chief minister Ashok Gehlot and state party president Sachin Pilot for the top post in the state.

In the current House, the BJP has 160 seats and the Congress 25. Ms Raje is contesting from Jhalrapatan constituency, considered her bastion. This time she faces BJP veteran Jaswant Singh’s son Manvendra Singh who has defected to the Congress.

In Tonk, Sachin Pilot and Rajasthan transport minister and BJP candidate Yoonus Khan are face to face. Mr Khan is the only Muslim candidate fielded by his party.

In Telangana, security has been beefed up across the state. Additional DG (law and order) Jitender Thursday said that about one lakh police personnel including 25,000 central paramilitary forces are engaged in poll duties.

More than 1.50 lakh polling officials including reserve staff are in the process of giving final touches Thursday to make the election to the 119-member House a smooth affair.