Patel, who is Congress’s political advisor, stressed that he was never a candidate for the chief minister's post and 'never will be'. 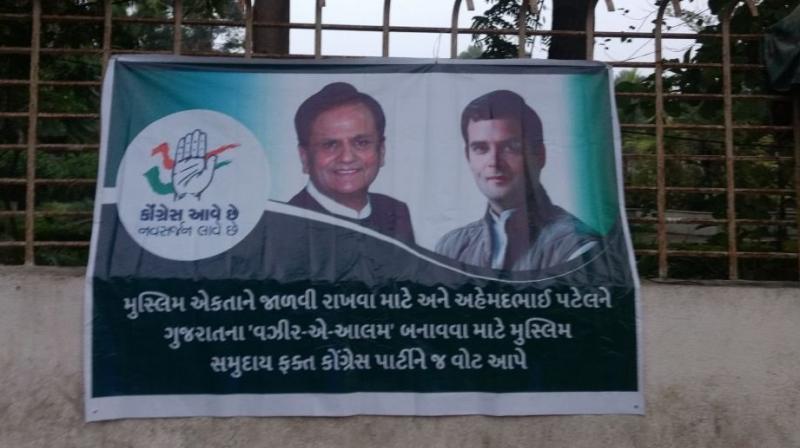 The posters that came up in old city area and Surat-East constituency of the diamond and trading hub which goes to polls on Saturday carried photos of Congress vice president Rahul Gandhi and Ahmed Patel. (Photo: ANI | Twitter)

Surat: Posters appealing Muslims to vote for Congress to make Ahmed Patel the chief minister came up in some minority-dominated areas in Surat on the last day of campaigning for first phase of Gujarat polls, but Patel called it a "dirty trick" by the BJP and said he was not in the race.

Patel, who is Congress President Sonia Gandhi's political advisor, stressed that he was never a candidate for the chief minister's post and "never will be".

The posters that came up in old city area and Surat-East constituency of the diamond and trading hub which goes to polls on Saturday carried photos of Congress vice president Rahul Gandhi and Ahmed Patel.

"Muslims are requested to vote for Congress party to maintain unity of the community and make Ahmed Patel wazir-e-aalam (chief minister) of Gujarat," read the posters.

Trashing the posters, Patel alleged that such acts show the "utter desperation" of the BJP as it fears defeat.

"Putting up fake posters and orchestrating a rumour campaign shows the utter desperation of the BJP.

"Fearing defeat, do they have to rely on such dirty tricks? I have never ever been a candidate for CM and will never, ever be," he tweeted.

He said the BJP is trying to divert the narrative from its performance to a divisive agenda.

"The moot issue is that BJP is trying very very hard to divert the narrative from its performance of last 22 years to a divisive agenda.

"Hence their reliance on lies & propaganda. But people of Gujarat have made up their mind this time," Patel said in another tweet.

Congress leader RPN Singh on Thursday said Patel will not hold any post in Gujarat if the party comes to power.

"We have seen fake banners that have come up at many places in Gujarat (in the name of Congress, claiming Ahmed Patel will become the chief minister). There has to be a certain level of politics in a democracy, and Rahul Gandhi and Congress party do not go below that level," Singh said.

"But doing something like putting up posters of opposition parties and deciding that Ahmed Patel will be our chief minister is not right," he told reporters in Ahmedabad.

When Congress forms government, Ahmed Patel will hold no post in the state government, he said.

"Ahmed Patel has himself said this, but I would like to make it clear that such politics of putting up fake posters is not going to work in Gujarat as people here are intelligent and understand everything," he said.