INS Betwa will be salvaged, battle ready by 2018: Indian Navy

Teams of professional salvers have reached the accident site to assess the damage with more teams expected to arrive. 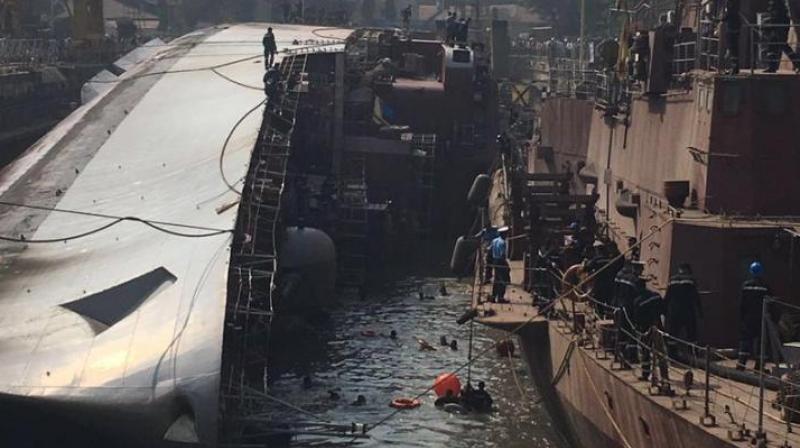 Two personnel were on Monday killed and 15 others injured when INS Betwa tipped over during undocking at Naval Dockyard in Mumbai. (Photo: Twitter)

New Delhi: The INS Betwa accident, probably the only one of its kind globally to have hit a naval force, is reported to have caused massive damage to the guided missile frigate with one-fourth of the 3,850-tonne ship remaining underwater even as its mast touched the dockyard.

But despite the damage, the Indian Navy has vowed to salvage the warship and make it fighting-fit by 2018.

“Come what may, INS Betwa will be salvaged. The Indian Navy is looking at first to make the flipped ship stand upright, then to assess the damage and to undertake salvage operations and finally to make it battle-ready by 2018. Every equipment that the ship had can be made indigenously,” said Indian Navy spokesperson Captain D.K. Sharma.

The Navy’s statement came even as teams of professional salvers, including from abroad, have reached the accident site to assess the damage with more teams expected to arrive. The initial assessment is likely to be complete within two days.

The Brahmaputra-class INS Betwa, commissioned into the Navy in July 2004 cost about Rs 600 crore. At current prices, the ship would be worth Rs 1,280 after factoring in an average annual inflation rate of 6 per cent.

While the naval spokesperson said that about 90 per cent of the ship’s equipment had already been de-stored as the INS Betwa was undergoing medium term refit which takes two years, speculation is rife that the sensitive electronics and avionics systems may have been damaged given the corrosive nature of the salty sea water.

The ship had arrived on the Mumbai naval dockyard for underwater repairs on October 28.

Admitting that the accident occurred to “lapses”, the spokesperson said the main gun — a Otto Melara 76mm gun — seemed to be undamaged. The ship is equipped with several weapon systems including Israeli Barak and Russian Klub missiles.