India   All India  07 Dec 2016  Clarify whether you support construction of Ram Temple: BJP to Mayawati
India, All India

Clarify whether you support construction of Ram Temple: BJP to Mayawati

BJP leader Shrikant Sharma said that it is in the manifesto of BJP that temple of Lord Ram should be made in Ayodhya. 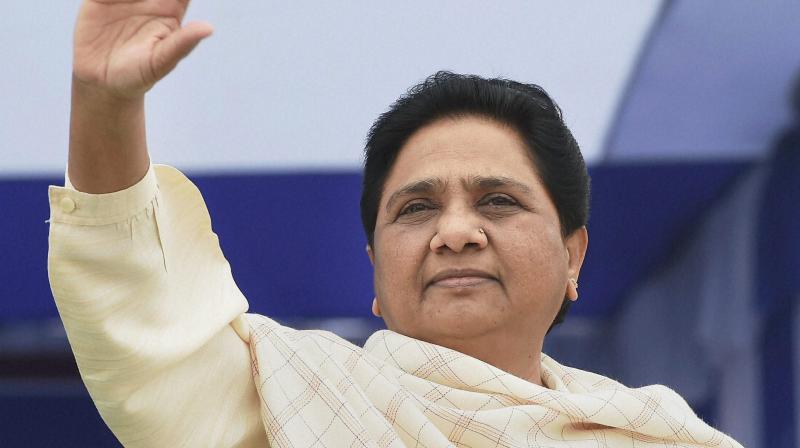 BSP supremo Mayawati waves at crowd at a rally at Ambedkar Park in Lucknow on Tuesday on the occasion of death anniversary of Dr Bhim Rao Ambedkar. (Photo: PTI)

New Delhi: The Bharatiya Janata Party (BJP) on Wednesday called on the Bahujan Samaj Party (BSP) supremo Mayawati to stop playing politics over the Ram Temple issue and dared her to clarify if she was for or against the construction of the controversial temple.

Speaking to ANI in Delhi, BJP leader Shrikant Sharma said the BSP and Mayawati should answer through a press conference whether they are in support or against the establishment of the temple.

"They should answer, are they against the temple? Do they not want the establishment of temple there? Mayawati should say. We challenge them to answer through a press conference whether they are in favour or against the establishment of temple? If they are in support, then why play politics on it? This matter is not of politics but of faith. People are trying to politics in the name of temple." Sharma said.

He further said that it is in the manifesto of Bharatiya Janata Party that temple of Lord Ram should be made in Ayodhya.

"Crores of people have faith in that location. Grandeur needs to be provided. One way is through court and the other is through the general committee. I think we will be successful in finding a way soon. For us the temple has always been a symbol of faith and all of us want the establishment of lord ram's temple." he added.

Since 1993, December 6th has been associated more with the demolition of the disputed structure in Ayodhya than with Dr Ambedkar, whose death anniversary is also observed on this day.

She attacked Prime Minister Narendra Modi and said like Delhi and Bihar, voters in the state will not fall for his 'Natak'.

"People here will not fall in his trap and in UP elections too BJP will have to face defeat. As UP elections are near, Prime Minister Modi who has ignored the state except his constituency Varanasi has now woken up for its development." She said.

Mayawati futher alleged that the Centre was trying to flatter Dalit voters in the name of B.R. Ambedkar, the government has given full freedom to communal forces, leading to chaos in the country and playing with religious sentiments for votes will not work.

"The Centre should have passed bill for reservation in promotions. It should have provided reservation to poor, who migrated to other castes and also upper caste poor by amendment in the Constitution. But it did nothing in this regard," she added.