1948-2016: Jayalalithaa, an undaunted administrator with a humane touch

Jayalalithaa was always unflinching with her bold decisions, unmindful of consequences even if they were bitter. 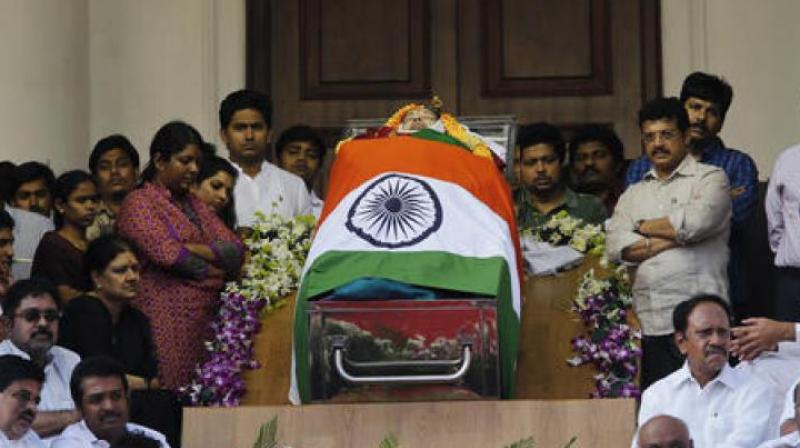 Politicians and friends surround the body of Jayalalithaa, who was dressed in green for her final journey. (Photo: PTI)

CHENNAI: Peter Brook, the celebrated English theatre personality, whose epic creation ‘The Mahabaratha’ in 1985 had won universal acclaim -, has among his many reflective gems, this memorable quote: “Time, which is so often an enemy in life, can also become our ally if we see how a pale moment can lead to a glowing moment; and then turn to a moment of perfect transparency, before dropping again to a moment of everyday simplicity.”

These words ring in with awesome aptness now, somewhat with an amazing precision as it were, in looking back at the administrative abilities of Jayalalithaa Jayaram. The bright and eloquent undisputed leader of the All India Anna Dravida Munnetra Kazhagam (AIADMK) for over 25 years in Tamil Nadu may not have been the darling of the entire bureaucracy, but everyone will agree she was an undaunted administrator.

Jayalalithaa was always unflinching with her bold decisions, unmindful of consequences even if they were bitter. However, there were many ‘pale moments’ in the roller-coaster political career of Jayalalithaa, ushered into politics by her one-time screen hero, M G Ramachandran, popularly known as MGR, who had emerged as a powerful mass leader and a fulcrum of anti-DMK forces in the State since the mid-1970s’. But whenever, given an opportunity in public office, those ‘pale moments’, at times even sad moments in her private life, turned ‘glowing moments’ of effective articulation and execution of policies for the people.

But cut back a little into the formative factors, just to help place in context what defined her 68 years of a tumultuous public life: From her punishing, alienated childhood days, her mother Sandhya’s influence and what the value of motherhood meant to her, being unwittingly pushed into the dog-eat-dog world of cinema after a brilliant school record, reluctantly landing in the much bigger world of politics after being mentored by the legendary actor-turned-politician MGR without any political family to back her, and later ascending to a new phase that promised to give ‘Amma’ a pan-Indian profile to the point of being considered a possible Prime Ministerial candidate of non-Congress/non-BJP alternate front in the run-up to the 2014 Lok Sabha polls, Jayalalithaa had seen it all.

And now to the elements of real politik, which she handled and shaped in the State. In her first stint as Chief Minister, the firmness with which she put down forces of terror, then identified with the militant Sri Lankan Tamil outfit LTTE, in the aftermath of the assassination of former Prime Minister Rajiv Gandhi in May 1991 by a woman suicide bomber at Sriperumbudur, had a huge peace dividend to it. Tamil Nadu returned to its placid track, even as the then SIT Chief and former CBI director, D R Karthikeyan once observed that the investigation into the Rajiv Gandhi case could not have been successfully accomplished without the excellent support of the then State government.

During her second stint as Chief Minister (2001-2006), when the chips were down, in the wake of the unprecedented en masse sacking of state government employees - a senior official then told this Correspondent she was misled into that decision by one of her senior Ministers in the Cabinet, Jayalalithaa turned the tide with two astonishing administrative feats. The capture of the elusive forest brigand Veerappan in October 2014, was followed by the splendid way she responded to the catastrophic December 2004 Asian Tsunami that devastated large parts of coastal Tamil Nadu.

Notwithstanding her imperious ways in handling several other issues including the media, there was something very human and touching about Jayalalithaa. At the end of a long-interview in 1997, one line that she uttered last still rings in my mind: “If after all that has happened to me so far, I am still around, then God must have a purpose for me, for each and everyone of us.” That is what Peter Brook would have termed, “a moment of perfect transparency, before dropping again to a moment of everyday simplicity.” That is one important facet of Jayalalithaa Jayaram, we cannot forget.