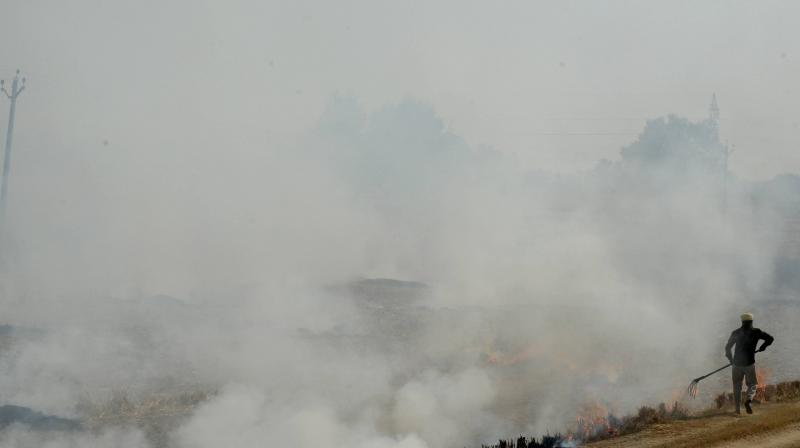 Fatehpur/Lucknow: Cases have been registered against at least 30 farmers in different areas of Uttar Pradesh's Fatehpur district for allegedly burning farm stubble in the past two days and eight of them were sent to jail as they could not pay the fine, police said on Saturday.

"On Thursday, in Bhairampur village, cases for burning farm stubble were registered against eight farmers and the sub-divisional magistrate has recovered the fine from them," Station House Officer (SHO), Hussainganj, Satyendra Singh Bhadauria said.

The action was taken on reports from lekhpals (revenue officials), he said.

"Eight farmers have been sent to jail as they were unable to pay the fine to the sub-divisional magistrate," SHO, Mallawa, Sher Singh Rajput said.

His Kotwali counterpart, Ravindra Srivastava said that action has been taken against three farmers in his area and a fine of Rs 10,000 has been recovered from each of them.

SHO, Thariyon, Upendranath Rai said that late on Friday night, cases were registered against 14 farmers in his area.

District agriculture officer Brijesh Kumar Singh said that so far cases have been registered against 28 farmers for burning stubble, and fine has been recovered from them.

However, a senior district police officer alleged that the agriculture department was not giving correct figures.

In the last fortnight, cases have been registered against over 100 farmers on complaints lodged by revenue officials, he said.

"Brick kilns in Fatehpur emit smoke throughout the day, but no action is initiated against their owners. But, fake cases are registered against farmers, and they are sent to jail. If the cases against farmers are not withdrawn, then a state-wide agitation will be undertaken," he said.

Bahujan Samaj Party (BSP) chief Mayawati on Saturday appealed to the Uttar Pradesh government to make farmers aware about stubble burning and its impact on air pollution, before initiating any action against them.

In a tweet in Hindi, she said, "The atrocities on farmers in the garb of pollution caused due to stubble burning in Uttar Pradesh is extremely condemnable. The government before taking any action against farmers, should make them aware and give them necessary assistance. This is the demand of the BSP."

The tweet by Mayawati comes a day after Uttar Pradesh Chief Minister Yogi Adityanath directed officials to ensure that farmers are not harassed or misbehaved with them when action is taken against stubble burning.

The chief minister also said new experiments to use crop residue should be encouraged and projects to prepare bio fuel/power from stubble should be reviewed.

"The farmers should be made aware of the impacts of stubble burning on the environment and pollution caused by it and asked the agriculture department to run awareness programmes for this. It should be ensured that farmers should not be misbehaved with or harassed while taking action against stubble burning," an official statement quoted the chief minister as saying.

"Effective use of stubble can help farmers in increasing their income," Adityanath said, according to the statement issued in Lucknow on Friday.