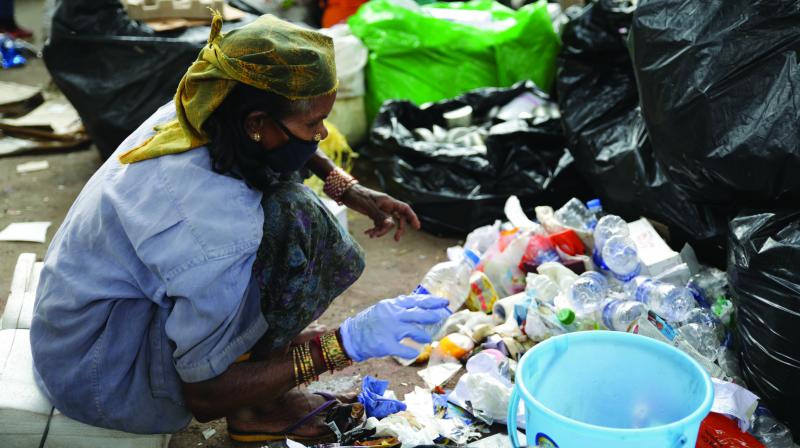 While Gurgaon, Delhi and several modern cities are still struggling to get housewives to segregate wet and dry waste for proper management of solid waste, in Danapur, Khagaul, Phulwari Sharif blocks of Patna district of Bihar, representatives of women’s self-help groups are spearheading the charge to reduce the waste discarded in the open dumping grounds.

While Gurgaon, Delhi and several modern cities are still struggling to get housewives to segregate wet and dry waste for proper management of solid waste, in Danapur, Khagaul, Phulwari Sharif blocks of Patna district of Bihar, representatives of women’s self-help groups are spearheading the charge to reduce the waste discarded in the open dumping grounds. Though the project is just over a year old, the areas they work in already look cleaner. There has been a 60 per cent decrease in waste discarded and garbage dumps are not visible in areas where women are bringing about change.

With technical support from the Aga Khan Foundation (AKF), in ward 16 of Khagaul, these women “cleanliness champions” are working with 600 households on segregation of waste and composting. At the local level, AKF’s partner, Gram Swaraj Samiti Goshi, has provided nine mobilisers for the solid waste management project, supported by the European Union and the Bihar government.

Munni Devi, Shubha, Shanti and Kuriya, all in the 30 to 45 years age group, set out for work at 6.30 am. While Munni Devi and Shubha, carrying identity cards and wearing their smart green jackets and caps with masks on their faces and gloves on their hands, go from house to house ensuring that the wet and dry waste from 300 of the 600 households of the ward are segregated for collection, Shanti Devi and Kuriya Devi are working with 200 households on home composting. A tricycle has been provided for transporting the waste. Some 100 households are still to join the programme.

The urban local body provides the garbage collection vehicle and a swachhata karmi, who accompanies the cleanliness champions collecting the waste. At Khagaul’s ward 16, a mini segregation centre of three large brick pits has been constructed on 220 sq ft of government land, earlier a dumping ground for processing the waste. Each pit can hold the waste from 500 households. The wet waste has to be turned periodically for aerobic composting and biodegraders are added occasionally to speed up composting. With a wall painting and a tree plantation around it, the place looks neat and clean. It has also been fenced off to keep away dogs and stray animals.

For three months, a financial incentive of `3,000 a month was provided to the women working with families at the household level for composting as well as the women who transport the waste from homes to the segregation centre. After demonstrating the feasibility of the project and the important role of women, the urban local bodies will take over the solid waste management project, paying the women `200 a day or `6,000 in a month. This is a windfall for women living on the margins.

Several meetings have also been held with the ragpickers at Khagaul to involve them in the working of the mini-segregation centre. Since they do not want to work on a monthly basis, those identified will be paid `40 a day, initially for three months.

Munni Devi recalls that she turned away the mobiliser who was involving her in the project thrice. “I looked down on the work as dirty. I did not want to muck my hands in kachda (garbage). Today, in my uniform, I have a certain status and responsibility. What was kachda is now sona (black gold).”

Supporting the urban local bodies (ULB) in establishing a governance system for solid waste management, AKF has helped establish models that can be replicated by other ULBs across Bihar.

Reaping the benefits of home composting at the adjoining ward 17 of Khagaul are Khushi Devi, Uma Devi and 750 other young and old women whose terrace gardens are blooming with vegetables and flowers. It is estimated that each house generates 400 grams of wet waste and 200 to 300 grams of dry waste like leaves, paper, wood shavings. Till 2018, Khushi Devi, 27, would go to the market and buy manure for her pots on the double terrace of her home. One day she met Shanti Devi, president of an SHG who was working with AKF on segregation of wet and dry waste and learnt about home composting. Khushi became one of the best students on composting and no longer has to buy manure. I save `45 a month since I no longer buy manure and my terrace garden is a riot of colour and happy, healthy organic vegetables, she says.

Both Uma and Khushi collect their wet kitchen waste and store it in large discarded containers like dustbins, etc of 10 kg and more. The waste is turned every second day, adding dry leaves, pieces of newspaper and in about 40 to 45 days it becomes manure. From every 10 kg of wet waste, Khushi gets five to six kg of manure. At the last stage the compost is sifted and the finer residue is ready for sprinkling in flower and vegetable beds and pots.

On a visit to Khushi’s home in mid-October, there were brinjal, pumpkin, cucumber, green cardamom, spinach and chauli, a nutritious leafy vegetable, and chilies growing on her terrace. Khushi’s family also owns 1,650 sq ft of land on which they grow vegetables and flowers. Its home grown compost that nourishes her plants both on the small plot as well as her double terrace. “We grow enough vegetables for our family of 12.” The surplus vegetables are distributed to friends and well wishers. Khushi admits, “I could not have done this composting venture on my own”. Everyone in her joint family, mother-in-law, sister-in-law and husband has helped her.

Today Khushi is a champion at composting and would like to do the composting of all the wet waste of the 300 to 350 households of ward 17 on the family’s 1,650 sq ft of farm land. “I will then make money from this black gold,” she says.

Also on the cards is a material recovery facility centre for dry waste on 5,000 sq ft at Danapur.

The writer is a veteran journalist based in Delhi