Sidhu said if he receives no response in the third letter, he will go to the shrine across the border like 'any other pilgrim'. 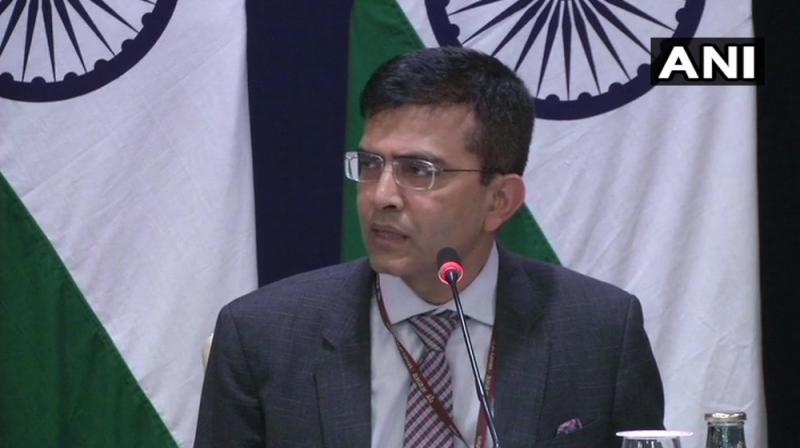 'I feel the event on November 9 is a very big event and it would not do justice to that event to highlight just one individual,' he said. (Photo: File)

New Delhi: The inauguration of the Kartarpur corridor is a "very historic" event and it would not do justice to it to highlight "one individual", the Ministry of External Affairs said on Thursday on Punjab MLA Navjot Singh Sidhu's repeated request for clearance to travel to Pakistan for the ceremony.

Ministry of External Affairs (MEA) Spokesperson Raveesh Kumar's remarks came in response to a number of questions seeking clarity on Sidhu writing letters to the ministry for permission to visit Pakistan.

The former Punjab minister on Thursday wrote to the ministry, asking it to make it clear if it had any inhibition on his attending the opening ceremony of the Kartarpur corridor in Pakistan.

The Congress leader has said if he receives no response to the latest letter -- the third one written by him -- he will go to the shrine across the border like "any other pilgrim".

Asked about clarity on the issue, Kumar said the inaugural event is a "very historic event" as India has been trying for the last 20 years that this can fructify.

"I feel the event on November 9 is a very big event and it would not do justice to that event to highlight just one individual," he said.

"On the issue of a particular person going or not, or the specific travel plan of that person, I don't think, considering the magnitude of the occasion, it would be appropriate that we comment on whether a particular individual can go or not," Kumar said.

He said for decades, pilgrims had a dream that they could visit Gurdwara Darbar Sahib without a visa and that dream was going to be realised.

"As far as an individual going is concerned, there is a process that everyone is aware of. The process is that there is a website under Ministry of Home Affairs, some documents have to be submitted, the registration would be on that basis, and they can go," he said.

"Even all the details of the inaugural 'jatha' have not been shared as this is a matter of faith. Highlighting individuals is not important," Kumar said.

He also noted that leader of Indian delegation is a religious leader --Giani Harpreet Singh. The corridor will facilitate a smooth movement of Indian pilgrims, who will have to obtain a permit, to Kartarpur Sahib located in Pakistan's Narowal district across the Ravi river.

Sidhu had come under fire from the opposition after he had hugged Pakistan Army chief Gen Qamar Javed Bajwa during the swearing-in ceremony of Prime Minister Imran Khan in August last year. Sidhu had then claimed that General Bajwa had told him about "efforts to open the Kartarpur corridor".

On November 4, he had received an invitation from Khan bearing the serial number '0001' on an invitation card for the inauguration of the Kartarpur corridor.