India   All India  07 Nov 2019  He abused me, pulled my arm: Journalist misbehaved by BJD MP, FIR registered
India, All India

He abused me, pulled my arm: Journalist misbehaved by BJD MP, FIR registered

Mohanty, however, denied the allegation, even as visuals of the incident were broadcast by local TV channels. 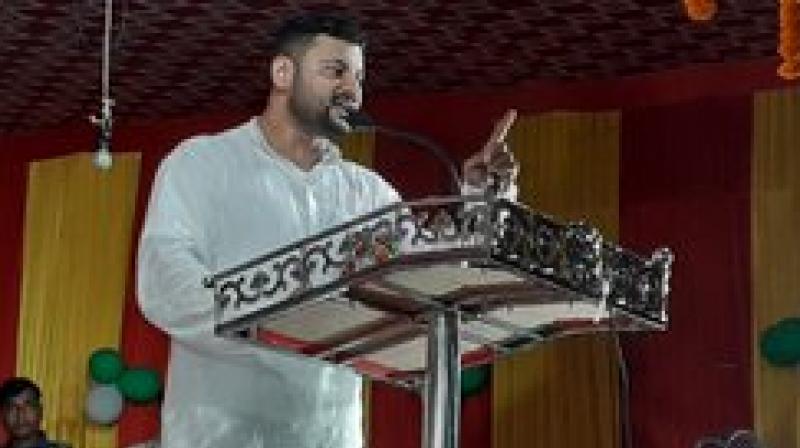 Bhubaneswar: An FIR was registered against BJD MP Anubhav Mohanty for allegedly misbehaving with a journalist of a private TV channel, police said on Thursday.

According to the complaint filed by journalist Manoj Swain, the actor-turned-politician on Tuesday abused him, both physically and verbally, when he sought his comment on a newly announced project.

Mohanty, however, denied the allegation, even as visuals of the incident were broadcast by local TV channels. Swain said the 37-year-old Kendrapara MP verbally abused him and pulled him by his arm in full public view on Tuesday at an event.

He sought police protection, alleging that the MP and his supporters have issued threats to him. Inspector In-Charge of Kendrapara town police station, Ranjan Samantray, said that an FIR has been filed under various sections of the IPC and the matter was being investigated.

Tuesday's incident came five months after another woman journalist filed a complaint against Mohanty and his brother at Purighat police station in Cuttack.

The MP was booked on the charge of assaulting and sexually harassing the scribe. Condemning the Kendrapara episode, media persons and political leaders across the state sought immediate action against the Biju Janata Dal (BJD) parliamentarian.

A delegation of journalists met Kendrapara collector Samrath Verma and demanded an apology from the Lok Sabha MP, terming his conduct as unacceptable and highly unbecoming of a peoples representative.

In Bhubaneswar, protesting journalists threatened to gherao Odisha Assembly and chief minister Naveen Patnaiks residence if action was not initiated against the parliamentarian in 24 hours.

The demonstrators also urged the state government to bring a law to protect the journalists. Opposition parties claimed that the ruling party MP should learn some manners.

The visuals of the confrontation were disturbing, senior BJP leader and Bargarh MP Suresh Pujari said, adding that such incivility by a parliamentarian was not good for democracy.

He should know how to behave. Echoing similar sentiments, Congress MLA Suresh Routray asserted that the BJD MP needs to learn some manners. His party colleague and legislator Tara Prasad Bahinipati said the ruling party seems to have become arrogant having stayed in power for so many years (19 years).