The announcement came a day after the chief minister said that Faizabad district will henceforth be known as Ayodhya. 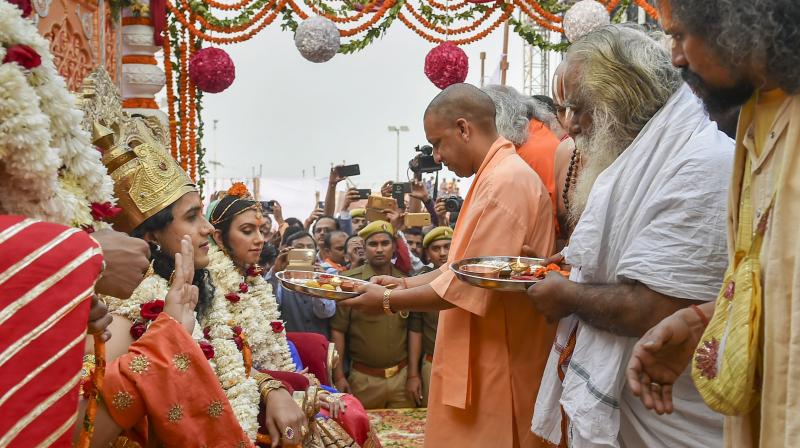 Uttar Pradesh Chief Minister Yogi Adityanath performs 'arti' of the aristises dressed as Lord Ram, Sita and Laxman after their arrival for the Deepotsav on Tuesday. (Photo: PTI)

Lucknow: Uttar Pradesh Chief Minister Yogi Adityanath on Wednesday announced setting up of a grand statue of Lord Ram in the temple town of Ayodhya.

The announcement came a day after the chief minister said that Faizabad district will henceforth be known as Ayodhya.

Addressing reporters on the occasion of Diwali, Adityanath said, "There will be a statue of Lord Ram and the details will be decided according to the land. There will be an idol for worshipping inside the temple but the other one will establish the town’s identity.”

He added that the government will work under the existing framework and plan accordingly. “We will work in such a manner that the statue will honour the faith and also become Ayodhya’s identity.”

"Ayodhya is a symbol of our 'aan, baan aur shaan' (honour, pride and prestige)" Adityanath had said on Tuesday on the occasion of "Deepotsav".

Earlier in the day, CM Yogi Adityanath visited and offered prayers at the Hanuman Garhi temple. On Tuesday, he had also performed 'Aarti' on banks of Sarayu river in Ayodhya with South Korean first lady Kim-Jung Sook.