Gandhi offers prayers at the bank of river in Jabalpur. 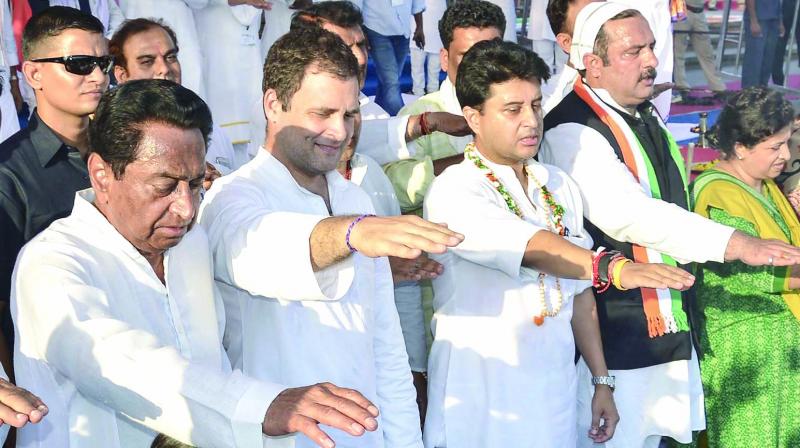 Bhopal: Congress president Rahul Gandhi on Saturday turned “Narmada Bhakta” while sounding bugle for his party in Mahakoshal region of Madhya Pradesh for the November 20 Assembly elections in the state.

Mr Gandhi offered prayers at Uma Ghat, the bank of Narmada in district headquarters of Jabalpur when he was sworn along with a host of Congress leaders by a little girl to keep the mighty river, lifeline of MP and Gujarat, clean.

He also performed “Maha Aarti” (moving lighted lamps in a particular way) at the river bank to pay obeisance to Narmada, presiding deity of Madhya Pradesh, before launching a seven-km road show in Jabalpur city. This was his third visit to MP in last one month.

He had on September 20 visited Bhopal to launch party campaign in “Madhya Bharat” or central MP, when he was projected as “Shiv Bhakt” by the party.

A week later, he sounded poll bugle for the party in Vindya region of MP when he was projected as “Ram Bhakt” by the party.

He had launched the party campaign in the region after offering prayer at a Ram temple at Chitrakoot in Satna district then.

Earlier in the morning, he staged a road show in district headquarters of Morena in Mahakoshal and later addressed a public meeting there.

He vowed to introduce “Tribal Bill” in poll-bound states of Madhya Pradesh, Chhattisgarh and Rajasthan to ensure rights of adivasis on their lands and other resources in their respective areas, if Congress returned to power in these states in the November-December polls.

He also promised to bring necessary amendments in the current crop insurance policy to benefit the farmers if Congress returned to power at the Centre.

Mr Gandhi also reiterated his charge that Rafale deal was struck by the Centre to benefit an industrialist.