Honeypreet was arrested on October 3 in connection with the deadly violence that had claimed 39 lives in Panchkula. 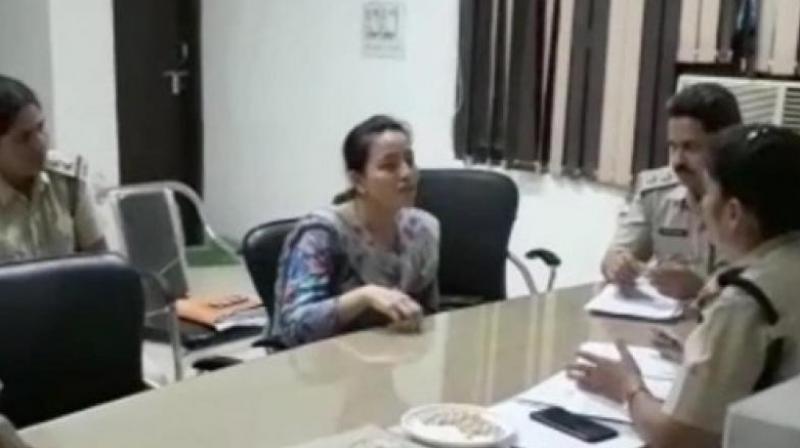 The officer said that Honeypreet, who is currently in police custody, was not cooperating in the investigations. (Photo: PTI)

Chawla also said that 36-year-old Honeypreet, who claims to be the adopted daughter of jailed sect chief Gurmeet Ram Rahim Singh, was misleading and not cooperating with the police during her interrogation.

Honeypreet, alias Priyanka Taneja, was arrested by the Haryana Police on October 3 in connection with the deadly violence that had claimed 39 lives.

Asking if Honeypreet's hand in incidents of violence has come to light, Chawla on Friday said, “According to the evidence we have gathered so far, definitely she has hand in this".

The police will put the evidence and other facts before the court, he said without elaborating.

A lookout notice had been issued earlier against Honeypreet.

However, she evaded the police by moving from one place to another in several states including Rajasthan, Punjab and Delhi, according to police.

The officer said that Honeypreet, who is currently in police custody, was not cooperating in the investigations.

"Her attitude is not proper with regard to investigations being conducted. Initially, she tried to feign ignorance.

"When she was confronted with facts and evidence about what happened in Panchkula, she started misleading," he alleged and hoped that she will start cooperating in the probe.

He said Honeypreet was taken to Bathinda, on Thursday, to verify the information she had given to the police.

"We found that the entire information given by her was turning out to be false after which we decided to return from there," the officer said.

The police were keen to ensure that the entire conspiracy is unearthed. "We are hopeful that we will be able to dig out the truth," he said.

Asked if any political leader had given shelter to Honeypreet when she was on the run, the police officer said, "At this stage, I do not think it will be appropriate to comment on this."

Chawla said that during the interrogation of some other arrested accused, it has been alleged that an amount of Rs 1.25 crore was distributed to some Dera members to arrange logistics for inciting violence in Panchkula on August 25 if the Dera chief was convicted in the rape case.

To a query, he said raids are on to the nab other key Dera functionaries accused of involvement in the violence, Aditya Insan and Pawan Insan.

"Our raids are going on continuously and we are hopeful of making early arrests," he said.

About Aditya Insan, Chawla said a lookout notice had been issued against him earlier.

"There is no input that Aditya Insan has fled the country," he said to a query.

Meanwhile, Chawla appealed to the media to refrain from publishing or broadcasting any news pertaining to the ongoing investigations "that is speculative and not certified".

"Such news is confusing the common man and it is also affecting media's credibility," he said. He denied that Panchkula police has sent a notice to the 45-member Dera committee.