India   All India  07 Oct 2017  Diwali has come early due to decisions made in GST Council: Narendra Modi
India, All India

Diwali has come early due to decisions made in GST Council: Narendra Modi

PM said the countrymen want the fruits of development to reach them. Nobody wants their children to live in poverty. 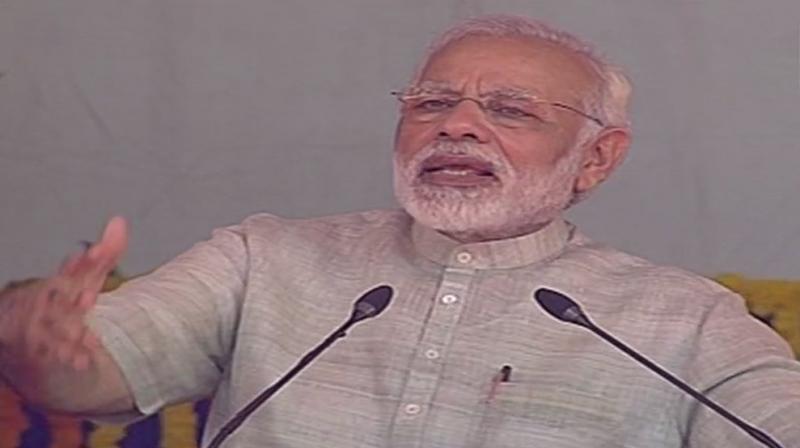 Dwarka: Prime Minister Narendra Modi on Saturday said that Diwali has come early this year after his government made few of the important changes in the Goods and Services Tax (GST).

Addressing an event at Dwarka, the Prime Minister said, "Diwali has come early for our citizens due to the decisions taken in the GST Council."

He further said, "We had said we will study all aspects relating to GST for 3 months, including the shortcomings. And thus, the decisions were taken with consensus at the GST council."

With people extending support to government policies, Modi said, "When there is trust in a government and when policies are made with best intentions, it is natural for people to support us for the best interests of the nation."

The PM further said, "The common citizen of India wants the fruits of development to reach him or her. Nobody wants their children to live in poverty."

He said, his government wants to help people fulfil that dream and want to fight poverty.

With more of foreign investments coming to India after his government came to power in 2014, Modi said, "The world's attention is being drawn to India. People are coming to invest here (India). All this will bring opportunities for the people of India."

The PM said he sees Gujarat contributing actively to the development of the country and congratulated the state government for its contributions.

Modi also said that his government is taking steps to ensure greater income for the farmers.

The Prime Minister said that the government will provide loans to fishermen on less interest rates to help them buy bigger boats.

He said, "To make life of our fishermen better we have to empower them, government will give them loans on less interest so they can buy bigger boats."

Modi who is on a two-day visit to his home state Gujarat, will lay foundation stones and inaugurate a number of projects.

He will also visit Vadnagar, his birth place, for the first time since becoming the Prime Minister in 2014.

Modi's trip began with a visit to Dwarkadheesh Temple.

During his two-day tour, the Prime Minister is expected to address as many as six public meetings launching various schemes and projects at five places in three regions of the state.

Following his prayers at Dwarkadheesh, Modi laid the foundation stone of a four-lane cable-stayed sea-link bridge between coastal town of Okha and Bet Dwarka Island. It was a link between old and new Dwarka.

The 2.32 km bridge, including 900 metres of central double span cable-stayed portion, will be constructed at a cost of Rs 962.43 crore.

The PM termed that the bridge would benefit the people of Bet Dwarka and devotees.

The four-lane 27.20 metre wide bridge will have 2.50 metre wide footpaths on each side. Solar panels installed on the roof of footpath will produce 1 MW power for street lights on the bridge, officials said.

At present, devotees visiting the Shri Dwarkadhishji temple at Bet Dwarka can travel only during the day by ferry.

Once the bridge is constructed, they can travel any time of the day.