There have been 32.50 recoveries too taking the national recovery rate to 77.31 per cent as active cases remain at 8.82 lakh 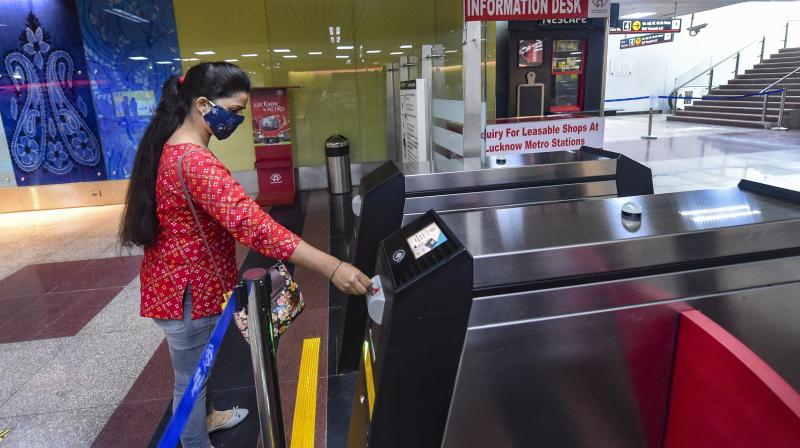 A passenger enters a metro concourse as Lucknow Metro resumes services after over five months suspension due to COVID-19 outbreak, in Lucknow, Monday. — PTI photo

A record 90,802 persons were found to be infected with novel coronavirus on Monday, taking India’s overall COVID-19 tally past 42 lakh. India is now in second position, behind the United States of America in terms of total numbers of cases. The cases are expected to rise further as India opened its Metro Rail services in several cities on Monday.

With 1, 016 new deaths, the country's total fatalities due to the deadly virus was 71, 711. There have been 32.50 recoveries too taking the national recovery rate to 77.31 per cent as active cases remain at 8.82 lakh -- which comprises 20.99 per cent of the total caseload. According to the union health ministry, case fatality rate is 1.70 per cent.

Meanwhile, the Congress accused the central government of failing to control the spread of the virus and demanded that Prime Minister Narendra Modi answer the nation on the way forward. Congress chief spokesperson Randeep Surjewala said despite warnings by experts and the Congress party, the pandemic was not controlled by adhering to the policy of 'Test-Trace-Isolate-Treat'.

"Prime Minister Modi must answer the nation on the strategy going forward. Will Modi ji answer for his failed leadership? How will the government stop the alarming rise in corona infection?" Surjewala said adding the coronavirus infection is now spreading to smaller cities, towns and villages across the country, yet the Modi government carries on in a state of "ignorance and indifference".

Surjewala said most experts have predicted that India is going through a second wave of infections, while some have opined that community transmission has begun, but the Modi government remains either unaware or refuses to even acknowledge . Surjewala said experts have feared that the deaths due to the pandemic could reach as high as 1,75,000.