From English to French, how foreign media covered Chandrayaan-2's landing 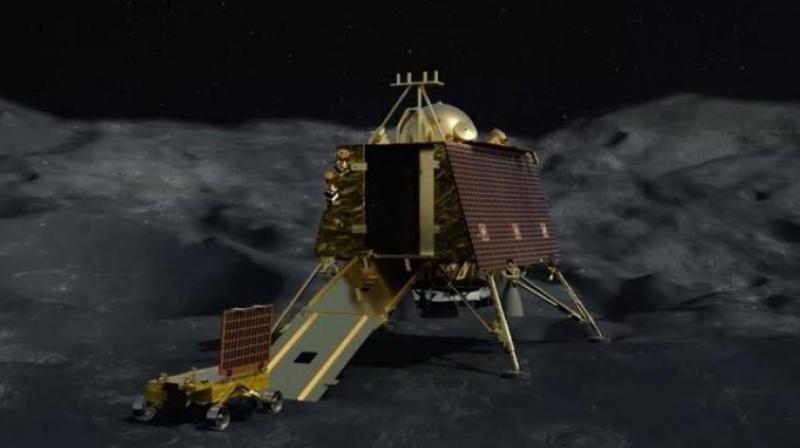 'India's historic attempt to soft land a rover on the moon may have ended in failure moments... The crowd had celebrated every small step during the controlled descent and the moment the landing was expected to take place, silence descended,' it said. (Photo: Twitter)

New Delhi/London: India's historic mission to soft-land a rover on the moon's uncharted South Pole may have gone awry, but the landmark attempt highlighted its engineering prowess and growing ambitions to become a space superpower, the global media commented on Saturday.

'The New York Times', 'The Washington Post', the BBC and 'The Guardian', among many other leading foreign media outlets, all carried stories on Chandrayaan-2, India's landmark moon mission.

"The loss of the Vikram lander and the Pragyan rover it was carrying to the lunar surface would be a big blow for India's space program...but all is not lost for the mission," it said.

"While India may not have stuck the landing on its first try, its attempt highlighted how its engineering prowess and decades of space development have combined with its global ambitions," the report said.

"The partial failure of the Chandrayaan-2 mission an orbiter remains in operation would delay the country's bid to join an elite club of nations that have landed in one piece on the moon's surface."

British newspaper 'The Guardian', in its article titled "India's moon landing suffers last-minute communications loss", quoted Mathieu Weiss, a representative in India for France's space agency CNES, as saying: "India is going where probably the future settlements of humans will be in 20 years, in 50 years, 100 years."

'The Washington Post' in its headline "India's first attempt to land on the moon appears to have failed" said the mission had been a source of "immense national pride".

"Social media erupted in support of the space agency and its scientists despite the setback... The incident could now set back India's growing space ambitions, seen as a reflection of the aspirations of its young population," it said.

"One of the successes of India's space program has been its cost-effectiveness.

Chandrayaan-2 cost USD 141 million, a small fraction of what the United States spent on its historic Apollo moon mission."

American network CNN described it as "India's historic landing on moon's polar surface may have failed".

"India's historic attempt to soft land a rover on the moon may have ended in failure moments... The crowd had celebrated every small step during the controlled descent and the moment the landing was expected to take place, silence descended," it said.

The BBC wrote the mission had made global headlines because it was "so cheap".

"The budget for Avengers: Endgame, for instance, was more than double at an estimated USD 356 million. But this isn't the first time ISRO has been hailed for its thrift. Its 2014 Mars mission cost USD 74 million, a tenth of the budget for the American Maven orbiter," it said.

French daily 'Le Monde' mentioned the success rate of soft landing on the moon, adding, "So far, scientists point out, only 45 per cent of missions aimed at alleviating have been successful".

It started its article with words "A broken dream" and said that the Indian newspapers "were quick to titrate their websites, after announcing the worse scenario that could expect the Indian Space Research Organisation".

In the early hours of Saturday, the Indian Space Research Organisation's (ISRO) plan to soft land Chandrayaan-2's Vikram module on the lunar surface did not go as per script.

Prime Minister Narendra Modi on Saturday asked ISRO scientists not to get disheartened by the hurdles in the moon mission Chandrayaan-2 and asserted that there will be a "new dawn and better tomorrow".