Modi then got up from seat and walked down where ISRO scientists and engineers were seated, and had a chat with them. 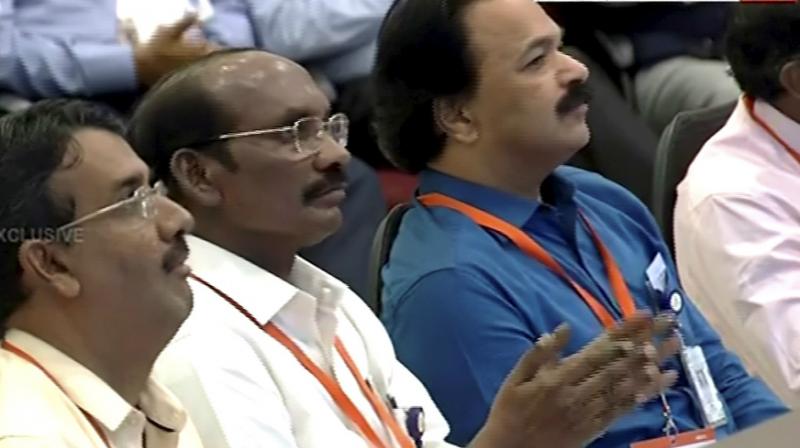 Bengaluru: Enthusiasm soon turned into a sense of despair at ISRO's Mission Operations Complex as India's second lunar mission Chandrayaan-2's lander 'Vikram' lost communication with the ground stations on Saturday just ahead of the soft landing.

The mission that started from July 22 with the launch of the Chandrayaan-2 spacecraft achieved one milestone after another in a phased manner. However, the Vikram module lost contact minutes before the crucial touchdown on the lunar surface in the early hours of Saturday.

The landing module, which was supposed to carry out various tests on the lunar soil, completed the rough braking phase as planned and entered the phase of fine braking phase till the altitude of 2.1 km.

There were cheers and clapping both at the mission control centre and the area where media was stationed, as Vikram's descent was on as planned at that time. But, disappointment was palpable on the faces of the ISRO scientists within minutes as they stopped getting any communication from the lander.

Soon, ISRO chief K Sivan approached his colleagues and started intense discussions, along with his predecessor AS Kiran Kumar. Sivan then went up to Prime Minister Narendra Modi, who was seated in the gallery and communicated to him about what had happened.

Modi had arrived at Bengaluru by a special flight only to witness the soft-landing from here.

Sivan's other predecessors K Radhakrishnan, K Kasturirangan joined the prime minister and patted Sivan on the shoulder to cheer him up.

Modi then got up from the seat and walked down to the place where ISRO scientists and engineers were seated, and had a chat with them.

Before departing, the Modi tried to boost the morale of the ISRO team saying that the nation was proud of them. "There is no need to get disappointed because it is not a small achievement. The country is proud of you," Modi said in his address to the scientists and students gathered there.

Gathering himself from the setback, Sivan made the announcement that communication has been lost with the lander.

Referring to the challenges in executing the soft landing of Vikram module named after the father of India's space programme Vikram Sarabhai, Sivan had earlier termed it as "terrifying" moment, as the ISRO has not done it before.

He had noted the success rate of soft landing modules launched by other agencies had been only 37 per cent.