The woman was carried to a hospital from her village by her family members after she went into labour. 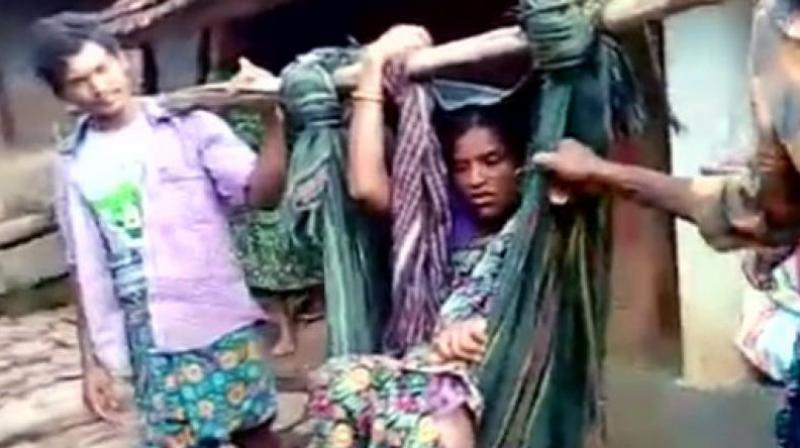 After around 4 kms, the woman was unable to bear her pain. The relatives and family members had to stop midway and help the woman deliver the baby. (Photo: ANI)

Hyderabad: A pregnant woman in Andhra Pradesh who was being carried to a hospital which was around 7 kms away from her village by her family members after she went into labour, gave birth to her baby midway.

In a video, a group of men and women can be seen walking precariously in a forested area on a muddy road full of pebbles. They can be seen carrying the woman in a makeshift carriage made of bamboo poles, ropes and a piece of cloth in Vizianagaram district.

After around 4 kms, the woman was unable to bear her pain. The relatives and family members had to stop midway and help the woman deliver the baby.

Villagers say that they have appraised to several authorities about the lack of connectivity but no help has reached them so far.

The woman was made to sit in the ground as three other women help her deliver the baby in the middle of nowhere. In another video, two women can be seen cutting the umbilical cord of the newborn baby with a blade.

#WATCH: A pregnant woman being carried by her relatives through a forest for 4 km in Vijayanagaram district due to lack of road connectivity. Hospital was 7 km away from the village but she delivered midway & returned. Both the baby & the mother are safe. (4.9.18) #AndhraPradesh pic.twitter.com/fvGZlYwDCl

A similar incident took place in the same district on July 29, wherein a pregnant woman was carried by her relatives for 12 kilometres due to lack of road connectivity.

In another case highlighting lack of amenities, a woman from Chhattisgarh's Balrampur district was carried on a cot for a distance of one kilometre after she delivered her child, as the ambulance was unable reach her residence due to poor road connectivity.