India   All India  07 Sep 2018  Nationwide strike call brings life to halt in UP
India, All India

Nationwide strike call brings life to halt in UP

The police had to resort to lathi-charge to disperse the mob and clear the highway. 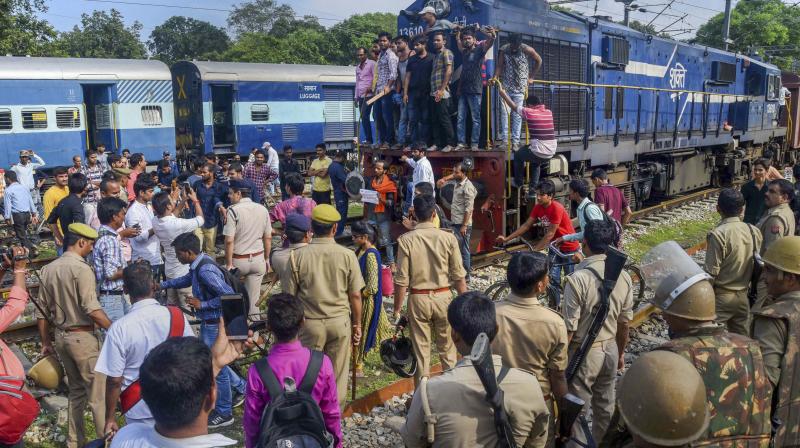 Lucknow: The call for Bharat Bandh in protest against the amendment in the the Scheduled Castes and Scheduled Tribes (Prevention of Atroc-ities) Act had a considerable impact in Uttar Pradesh, where upper- caste organisations led protests on streets, jammed highways and stopped trains in several districts.

Shops and commercial establishments were clo-sed in most districts including Lucknow, Ag-ra, Kanpur, Mainpuri, Hardoi and Gorakhpur.

In Hardoi, protesters shaved their heads to register their anger against the amendment in the SC/ST Act and trains were stopped in Agar and Mainpuri.

The Agra Expressway was jammed for several hours by demonstrators. The police had to resort to lathi-charge to disperse the mob and clear the highway. Protesters damaged a bus in Khairagarh in Agra and tyres were set on fire by protesters. In Agra, two caste groups clashed and pelted stones at each other after which the police burst tear gas shells to disperse the mob.

In Lucknow, protesting mobs tried to burn effigies of the Prime Minister, but the police managed to snatch the effigy before it could be set on fire. In Chinhat area, people resorting to protests by undressing.

In some districts of Bundelkhand, people staged demonstrations outside the offices of the ruling BJP and shouted slogans against the central and state governments.

Lawyers joined the agitation in Hamirpur. In Kannauj, children in the age group of four to six years were seen carrying placards with slogans against reservation written on them and large-scale protests were reported from Kushinagar too.

UP minister Siddhartha Nath Singh said that the protests were a political conspiracy against the BJP government in view of the approaching general elections. “Our government are working on the ‘Sabka Saath Sabka Vikas’ concept and there will be no injustice to anyone,” he said.