Kuttanad people don’t know how to open a new chapter

Jayanti doesn’t know how the government’s offer would help but does know she has to plough a lone furrow now on. 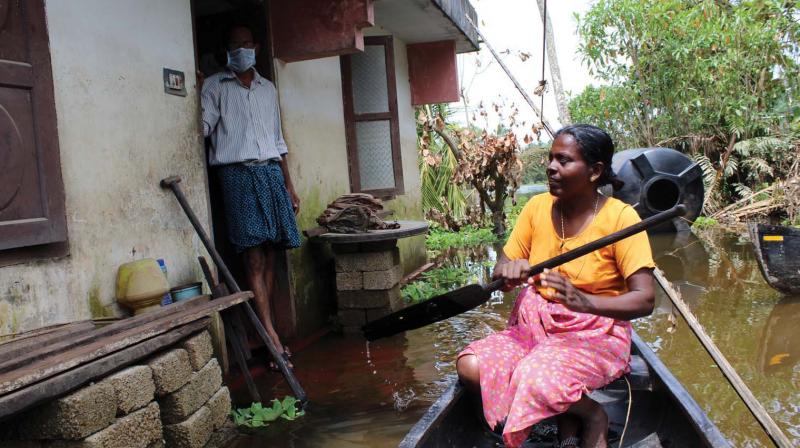 Houses at Valiyathuruthu settlement in Kainakary panchayath in Kuttanad remain inundated and the people are forced to stay in them.

Alappuzha : Jayanti Shaji, 45, Thachozha, Valiyathuruthu of Kainakary Panchayath, stood beside the river right in front of the local committee office of the Communist Party of India (Marxist) (CPM), washing the pile of clothes damaged in the floods.  Her face reflected the disappointment and helplessness most people of Kuttanad now feel. The water level has now receded to a great extent in many part of the region but not where her house stands. The flood water that entered her house has damaged all her household utensils which she collected with the savings of her lifetime.

Jayanti doesn’t know how the government’s offer would help but does know she has to plough a lone furrow now on.  She admits to the harsh reality now: she is unlikely to get back what has lost now and is unsure of living the life that she was leading till a month ago. “We have no hope in the efforts of any government, for our loss is beyond the offers of any government,” she said, pointing fingers at the flooded office of the CPM, the party in government now.

Jayanti is of the view that the entire Kuttanad region has been pushed back in time, at least by a generation, for the floods have left an irreparable damage on the land. She then looked miserably at her son helping her, a plus two students at SNDP Higher Secondary School, Kuttamangalam, which remains inundated. “There is no class for him for a month,” she added.

Vatsamma Maniyan, a housewife at Kuttamangalam has got every household appliance including television, refrigerator and the like damaged and strewn in floodwater that covers her short courtyard. She has no clues as to how her family could rebuild itself. At 72, she is not all that sure she will be able to fight another battle and regain what she has lost.

She says they lost not only their savings but also their jobs. The floods visited their settlement in mid-July, and followed twice in July, derailing all expectations.