Will help India obtain defence tech from US, waivers on S-400, Iran oil ‘being considered’. 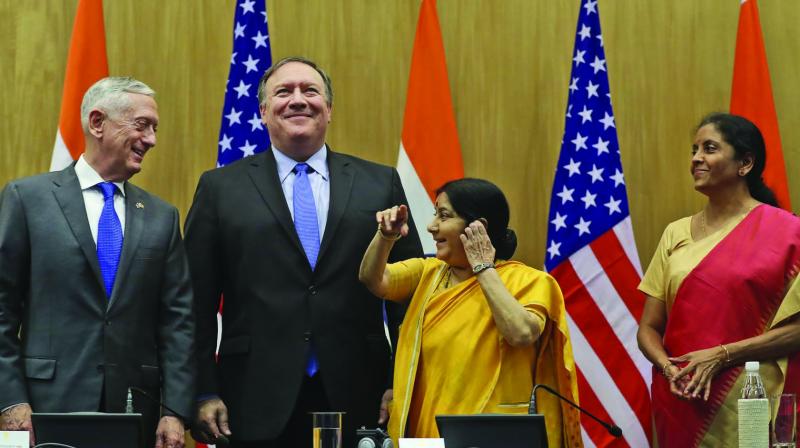 New Delhi: Following the culmination of the 2+2 Dialogue at the foreign and defence ministerial level, India and the United States on Thursday inked the crucial defence Communications Compatibility and Security Agreement (Comcasa) which will facilitate the obtaining by India of critical defence technologies from the US, access to critical communication networks installed on American defence platforms and reportedly pave the way for the sale of hi-tech armed drones to India. After the dialogue between external affairs minister Sushma Swaraj, defence minister Nirmala Sitharaman, US secretary of state Mike Pompeo and defence secretary Jim Mattis, the two countries also decided to carry out a massive tri-service exercise next year off India’s eastern coast, with New Delhi deciding to “enhance its interactions with the US military’s Central Command”.

It was also decided to establish “hotlines” of communication between the two Indian ministers and their respe-ctive American counterparts. In another development of huge significance, the two countries also called on Pakistan to ensure that the territory under its control is not used to launch terrorist attacks on other countries, adding that they called on Islamabad to “bring to justice expeditiously the perpetrators of the Mumbai, Pathankot, Uri, and other cross-border terrorist attacks”. New Delhi also said it “supports President Trump’s South Asia Policy” and that “his call for Pakistan to stop its policy of supporting cross-border terrorism finds resonance” with it.

New Delhi also raised the H1B visa issue, with Ms. Swaraj asking the US to keep the trust of Indians in their belief that it would not do anything against their interests. The issue of import of Iranian oil and Russian arms like the S-400 was also discussed, with New Delhi putting across its case forcefully to Washington and hoping for waivers in both cases. Later, speaking to the American media on India’s proposed S-400 missile deal with Russia, US Secretary of State Mike Pompeo said the US did not intend to penalise “great strategic partners like India” but added that no decision had yet been made on granting a waiver to New Delhi for the deal.

However, he did say that the US would work its way through a decision in the days ahead along with “partner” India, thereby indicating that a way out may be devised for New Delhi. Mr. Pompeo said, “There’s been no decision made. ... We do understand the history of India’s relationship with Russia and legacy systems. Our effort is not to penalise great strategic parters like India, a major defence partner. The sanctions aren’t intended to adversely impact countries like India. They are intended to have an impact on the sanctioned country which is Russia and so we’ll work our way through the waiver decision as the days and weeks proceed and we’ll do that alongside our partner India.”

On the issue of import of Inranian oil, he said, “We have told the Indians consistently, as we have told every nation, that on November 4 the sanctions with respect to Iranian crude oil will be enforced, and that we will consider waivers where appropriate, but that it is our expectation that the purchases of Iranian crude oil will go to zero from every country, or sanctions will be imposed.”

The Indo-Pacific region and China’s role in the region was also discussed. The two countries also “agreed to work together to secure India’s membership of the Nuclear Suppliers Group at the earliest”. Ms Swaraj said, “Overall, I am highly satisfied with our conversation today.” The American dignitaries also called on Prime Minister Narendra Modi who “congratulated” them and the concerned Indian ministers on the “fruitful and productive” talks. The next edition of the dialogue will be held next year in the United States.

“The signing of the Communications Compatibility and Security Agreement (Comcasa) on Thursday will enable India to access advanced technologies from the US and enhance India’s defence preparedness,” defence minister Nirmala Sitharaman said. An Indo-US joint statement released, stated, “They welcomed the signing of a Communications Compatibility and Security Agreement (Comcasa) that will facilitate access to advanced defense systems and enable India to optimally utilise its existing U.S.-origin platforms.” The defence minister further said, “We are also putting in place an enabling framework for closer cooperation between our defence forces. The signing of the Logistics Exchange Memorandum of Agreement (Lemoa) in 2016 and the Helicopter Operations from Ships Other Than Aircraft Carriers (Hostac) earlier this year were important steps in this direction.” Mr Pompeo described the signing of the Comcasa as a “a major step forward in our collaboration and cooperation”.

Ms Sitharaman said, “To enhance our synergies in this area, we have decided to carry out, for the first time, a tri-services joint exercise with the United States off the eastern coast of India in 2019.” She further said, “Defence cooperation has emerged as the most significant dimension of our strategic partnership and as a key driver of our overall bilateral relationship. The momentum in our defence partnership has imbued a tremendous positive energy that has elevated India-US relations to unprecedented heights.” In what is being seen as a significant statement, given the Chinese military assertiveness in the Indo-Pacific region, she added, “Maritime security has been a focus area of our cooperation. To deepen our ties in this area, we will expand our interactions on Maritime Domain Awareness.”

The two countries also discussed Pakistan-based terrorism in detail and named Islamabad in this regard, which is being seen as a huge setback for Pakistan. The Joint Statement said, “... they (India and US) called on Pakistan to ensure that the territory under its control is not used to launch terrorist attacks on other countries. On the eve of the 10-year anniversary of the 26/11 Mumbai attack, they called on Pakistan to bring to justice expeditiously the perpetrators of the Mumbai, Pathankot, Uri, and other cross-border terrorist attacks. The ministers welcomed the launch of a bilateral dialogue on designation of terrorists in 2017, which is strengthening cooperation and action against terrorist groups, including Al-Qaeda ISIS, Lashkar-e-Tayyaba, Jaish-e-Mohammad, Hizb-ul Mujahideen, the Haqqani Network, Tehrik-i-Taliban Pakistan, D-Company, and their affiliates.”

Ms Swaraj also said, “We welcomed the recent designations of Lashkar-e-Tayyaba terrorists by the United States. They underscore the international community’s scrutiny over the threat of terrorism emanating from Pakistan, which has affected India and the United States alike. In the 10th anniversary of the 26/11 attacks, we recognised the importance of justice and retribution for the masterminds behind this terrorist attack. We also discussed the situation in South Asia in some detail. India supports President Trump’s South Asia Policy. His call for Pakistan to stop its policy of supporting cross-border terrorism finds resonance with us.”

On the H-1B visa — a non-immigrant visa that allows US companies to employ foreign workers in speciality occupations that require theoretical or technical expertise in specialised fields — India mounted pressure on the US, with Ms Swaraj saying, “Specifically, I conveyed our expectation for a balanced and sensitive approach to the H-1B visa regime. Any change in it will have an (adverse) impact on the relationship for our relationship. I have mentioned this to Secretary Pompeo that on the basis of the friendship which exists between President Trump and Prime Minister Modi, Indians believe that America will not work against their interest. I have requested him to maintain the trust of Indians.”

On civilian nuclear energy cooperation, the joint statement said, “Both sides looked forward to full implementation of the civil nuclear energy partnership and collaboration between Nuclear Power Corporation of India Limited (NPCIL) and Westinghouse Electric Company for the establishment of six nuclear power plants in India.”