Swaraj breathed her last on Tuesday night at the AIIMS, New Delhi after suffering a cardiac arrest. 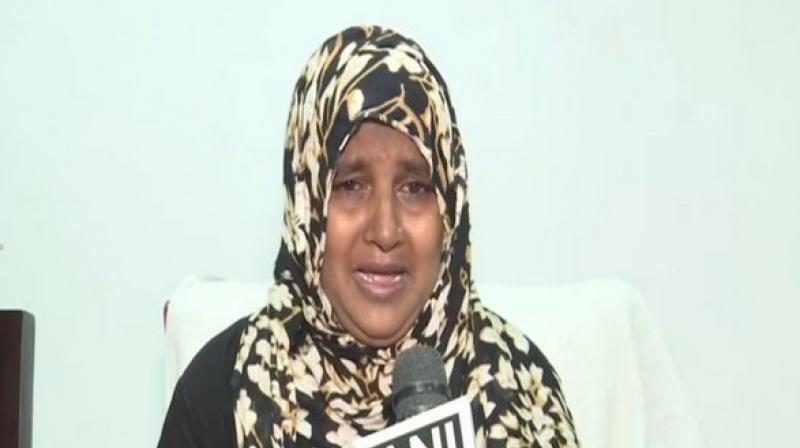 'I could not sleep the whole night when I was informed that Sushma Ji is no more. It is very upsetting for me. She helped me so much. I could not eat or sleep. I had no hope that I will be able to come to India but only because of her efforts, I was able to see my family in India,' she said. (Photo: ANI)

Hyderabad: Former External Affairs Minister Sushma Swaraj was known as a leader who would leave no stone unturned to help those in distress, and two such women - Zainab Bee and Ameena Begum - recalled how the BJP stalwart freed them from the clutches of slavery in the Gulf and helped them return home to their families.

Swaraj breathed her last on Tuesday night at the All India Institutes of Medical Sciences (AIIMS) New Delhi after suffering a cardiac arrest.

Speaking to ANI, a teary-eyed Zainab said the news of Swaraj's demise devastated her and recalled how she was helped by the former External Affairs Minister.

"I could not sleep the whole night when I was informed that Sushma Ji is no more. It is very upsetting for me. She helped me so much. I could not eat or sleep. I had no hope that I will be able to come to India but only because of her efforts, I was able to see my family in India," she said.

Describing the atrocities she faced while stranded in Saudi Arabia, Zainab said, "I was abused by the people and made to work in three houses without food and water. I did not have any money as they were not giving me any money and also was not allowed to talk to my family in India."

Ameena, who was rescued last year from Dammam in Saudi Arabia, said, "I requested Sushma Ji to help me come to India. She helped me a lot and in 2018, a year after I went to Saudi Arabia, I was able to come to India. She rescued me from the atrocities I was facing there. I am very upset that Sushma Swaraj Ji is no more. This is very disheartening to me. She helped a lot of people."

Meanwhile, Amjadullah Khan, a local leader and activist who had approached Swaraj with many human trafficking cases, also condoled the loss of the BJP stalwart, who, he called, an "iron lady".

"It is very sad that Sushma Swaraj is no more. I had the opportunity of working with her on problems faced by NRIs, especially Hyderabad city women who were stuck in Saudi Arabia and other Gulf countries, and nearly 200 cases were solved. She was very down to earth and she was an iron lady. She was respected by all, even the opposition parties and members of all religions, which is not easily seen these days in the new era of politics," Khan said.

Swaraj was admitted to AIIMS following the deterioration of her health.

According to sources at AIIMS, Swaraj was feeling restless at 9 pm on Tuesday and reached the hospital at around 9:30 pm in an ambulance.

A team of doctors tried to revive her for 70 to 80 minutes but failed in their attempt. Swaraj was declared dead at 10:50 pm.

The 67-year-old was appointed the Foreign Minister in the first term of the Narendra Modi government in 2014. She opted out of the 2019 Lok Sabha elections citing ill health.