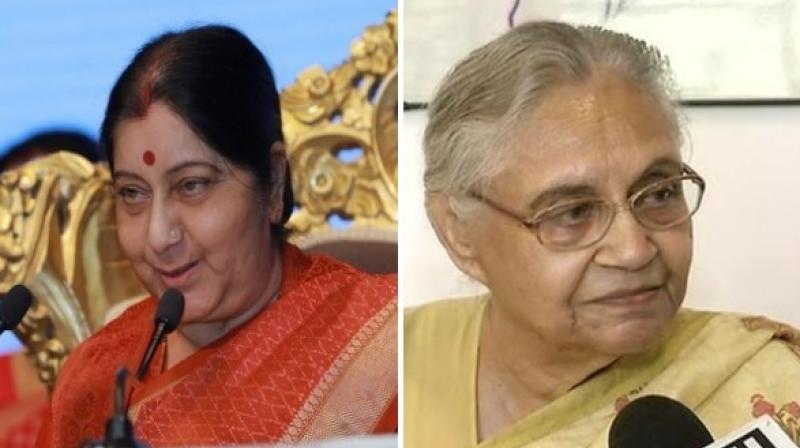 The two leaders, belonging to two ideologically disparate parties, had a lot in common. Both were gritty, articulate, rooted, popular, widely respected and had connections across the political spectrum. (Photo: ANI)

New Delhi: Delhi has had two women Chief Ministers and both of them passed away in about a fortnight of each other.

The two leaders, belonging to two ideologically disparate parties, had a lot in common. Both were gritty, articulate, rooted, popular, widely respected and had connections across the political spectrum.

They exuded personal warmth and had an easy connect with people and were politically active till the very last.

Their paths crossed when Sushma Swaraj was Delhi Chief Minister briefly in 1998 and Sheila Dikshit had been made Delhi Congress chief.

Congress won the elections, Dikshit became chief minister and continued in the post for a record 15 years by leading the party to victory in two successive elections.

Swaraj had accepted the challenge to be Delhi Chief Minister ahead of assembly polls and moved back to central level politics after the results.

She became a member of Rajya Sabha in 2000 and held portfolios of Information and Broadcasting, Health and Family Affairs and Parliamentary Affairs in the Atal Bihari Vajpayee government.

She was Leader of Opposition in Lok Sabha from 2009-2014 and served as External Affairs Minister in the first Narendra Modi government.

Dikshit won her first election from Uttar Pradesh and Swaraj from Haryana but they became chief ministers of Delhi. Both the leaders also lost elections in their political career.

Swaraj was the youngest cabinet minister in Haryana. A powerful speaker, her political rise as a national leader of BJP also in some ways matched the political rise of her party.

Swaraj and Dikshit accepted the challenges given to them by their parties. Swaraj contested from Bellary in Karnataka against Congress President Sonia Gandhi. She lost the seat, regarded a Congress stronghold, by a rather narrow margin of 55,000 votes.

Dikshit was projected as a chief ministerial candidate by Congress in Uttar Pradesh in the last assembly polls before the party struck an alliance with Samajwadi Party.

She was made chief of Delhi Congress ahead of this year's Lok Sabha elections and did not shy away from contesting polls.

Delhi has lost three former chief ministers in less than a year.