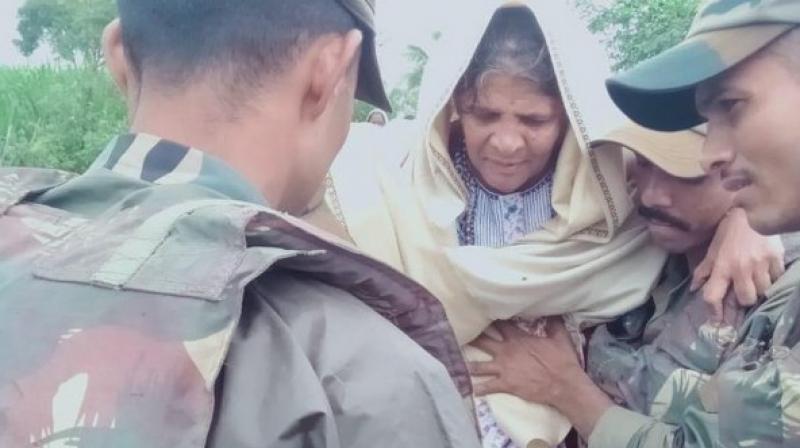 ‘More than 1300 people are reported to be stranded in these villages. Despite inclement weather and continuous rain in the region, all efforts are being made to evacuate the villagers along with NDRF and civil administration,’ stated the release. (Photo: ANI)

Pune: As the flood situation in Maharashtra and Karnataka continues to be grim due to incessant spells of rain and release of water from major reservoirs over the last few days, almost 1000 army officers have been deployed to carry out rescue operations.

The Indian Army is assisting the Maharashtra and Karnataka state authorities in carrying out relief and rescue operations in flood-hit areas.

"A total of 16 Columns and 12 Engineer Task Forces comprising of almost 1000 Army personnel have been employed in Belgaum, Bagalkot and Raichur district of Karnataka and Raigad, Kohlapur and Sangli district of Maharashtra to carry out flood relief operations," stated an official release from defence PRO.

According to the release around 500 people have been rescued, provided medical aid and food packets. The rescue operation by Army personnel is presently underway in the villages of Birwadi and Asankoli in Raigad District, Mouje Digraj, Haripur and Nandre village of Sangli and Kohlapur districts.

"More than 1300 people are reported to be stranded in these villages. Despite inclement weather and continuous rain in the region, all efforts are being made to evacuate the villagers along with NDRF and civil administration," stated the release.

The Deputy Collector of Pune, Amrut Natekar in a release stated that around 30 National Disaster Response Force (NDRF) officials and 24 Indian Navy officers along with rescue material were airlifted to Kolhapur on Wednesday.

"Total 132,360 people of 28397 families have been evacuated from Pune region from all five districts. All dams of Pune, Satara Sangli and Kolhapur are hundred percent full and all riverside villages of Pune district have been alerted," stated an official release from Divisional Commissioner of Pune Deepak Mhaisekar.

Six NDRF teams have been deployed in Kolhapur, three units in Sangli and one NDRF unit in Satara district.

In addition to this, four teams of Territorial Army have been deployed in Kolhapur and one in Sangli district.

Meanwhile, 89 boats are deployed to help people. Apart from this, Navy and coastal guard teams are also helping in the rescue operation.

The NDRF team waded through knee-deep water to carry our rescue operations. Some of the personnel were also seen sailing in inflated boats for rescue and relief operation.

Heavy rains have caused havoc in Maharashtra with thousands of people stuck in the flooding areas.

Earlier today, Chief Minister Devendra Fadnavis called a meeting to review the flood situation. Officials from various districts joined the meeting and briefed Chief Minister about the situation and the measures that are underway.