India   All India  07 Aug 2018  A man of letters, Karunanidhi delighted in the arts
India, All India

A man of letters, Karunanidhi delighted in the arts

From 'Sangam' literature to contemporary novels, he was a voracious reader and writer. 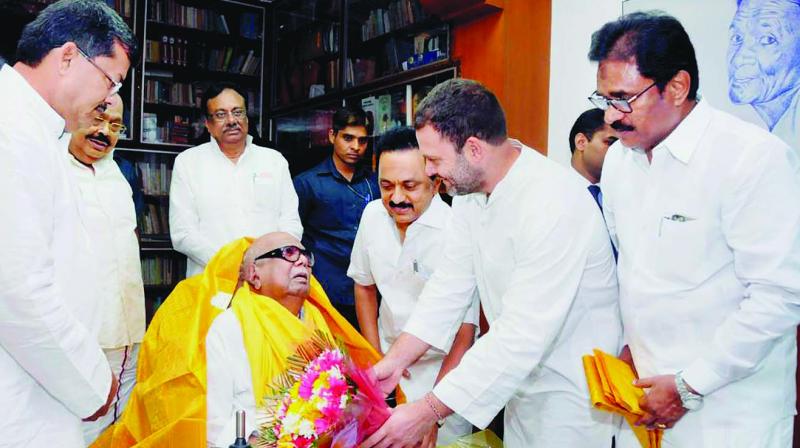 A highly imaginative Karunanidhi did not leave any opportunity to show his historical knowledge and interest in organising functions. (Photo: File/PTI)

Thanjavur: A man of letters, M Karunanidhi, former chief minister of Tamil Nadu, was well versed in Tamil literature. From 'Sangam' literature to contemporary novels, he was a voracious reader and writer.

His love for 'Silapathikaram' -- written by Ilango Adigal -- is legendary and he demonstrated this in writing dialogues and screenplay for the film "Poompuhar" in 1964 and by celebrating 'Indira Vizha' at Poompuhar in the 1970s.

Poompuhar, a sleeping coastal town until then, came to life with 'Silapathikara Kalaikoodam', 'Paavai Mandram' and other monuments constructed near the sea. 'Indira Vizha' was a grand celebration then with Karunanidhi participating in it.

'Pattimandrams', 'Kaviyarangams', seminars explored the richness of Tamil literature and enlightened audience on Tamil history. An illuminated 'Poompuhar', with lulling waves of the sea, was a feast to eyes of people who thronged the town for 'Indira Vizha' for three days in the early 1970s'.

A highly imaginative Karunanidhi did not leave any opportunity to show his historical knowledge and interest in organising functions. The millennium celebrations of the Big temple, built by King Raja Raja Cholan, at Thanjavur was one such occasion. Government joined with organisers of dance by 1,000 dancers at the temple to mark the millennium celebrations. He came and watched the programme by sitting at a corner. He did not enter the temple through the main entrance but entered through a gateway on the Southeastern corner of the temple, as it was not considered 'auspicious' for 'living rulers'. Later, he took part in a state function nearby and released a stamp and coin to mark the occasion.