I'm proud of my daughter: father of Haryana stalking victim

The victim was harrassed and stalked by Vikas Barala, a Haryana BJP leader's son in Chandigarh. 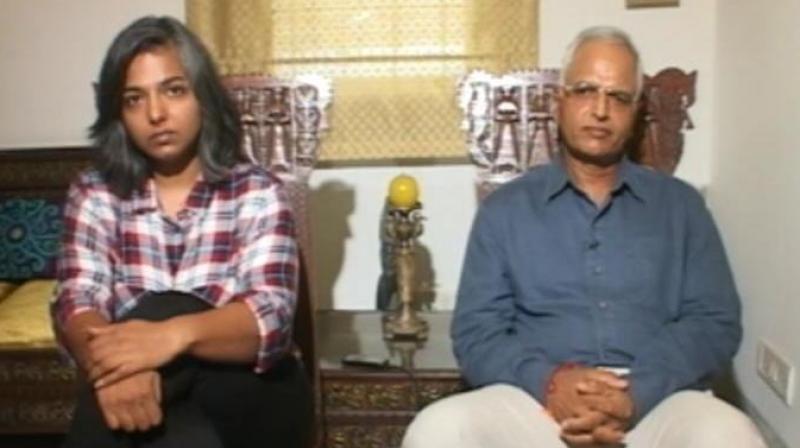 IAS officer Virender Kundu acknowledged in his post that the 'difficulties' he might face in fighting this case is nothing as compared to what his daughter Varnika has to. (Photo: Screengrab)

New Delhi: The father of Varnika Kundu, the 29-year-old girl who was allegedly harassed and stalked by Haryana BJP chief’s son in Chandigarh on Saturday, has praised his daughter for taking on the "worst form of chauvinism" in the society.

In a Facebook post on Monday, Virender Kundu said that they would not back out and fight against the culprits till the end.

IAS officer Virender acknowledged in his post that the "difficulties" he might face in fighting this case is nothing as compared to what his daughter Varnika has to.

"You have chosen to take on the worst form of chauvinism manifested in our society. My difficulties on account of this decision are nothing compared to yours," wrote Kundu.

"Our target is to ensure that the guilty are brought to book. They are adult men, students of law, who are fully aware of the consequences of their actions, and hence must be appropriately punished for their offences committed," he said.

Virender's daughter has alleged that Haryana BJP chief’s son Vikas Barala and his friend harassed and chased her while she was driving, alone, on her way to home on Saturday. She alleged that they even tried to open the door of her car.

Vikas and his friend were arrested after she filed a complaint with the police soon after the incident took place. Medical reports have confirmed that the accused were in inebriated state at the time of the incident, officials said.

Praising the Chandigarh Police for its swift actions, he said, "We firmly believe that after 70 years of Independence and democracy, the legal system of our country is mature and geared up to deliver justice."

Haryana Chief Minister Manohar Lal Khattar said on Sunday assured justice to the victim and said action will be taken against the accused once proven guilty.

"I came to know about this incident. Chandigarh Police has filed the complaint and I believe they will take appropriate action. This matter is not related with Subhash Barala but with an individual. So action would be taken against his son," Haryana Chief Minister Manohar Lal Khattar said.

Later on Sunday, the Congress accused the BJP government in Haryana of protecting Vikas from punishment.

He wrote: "As a father of two daughters, I feel compelled to take this matter to its logical conclusion. The goons must be punished, and the law must take its course. As would be expected, the goons are from influential families."

Following this, on Monday he took to social media and added, "the criminals must be punished."