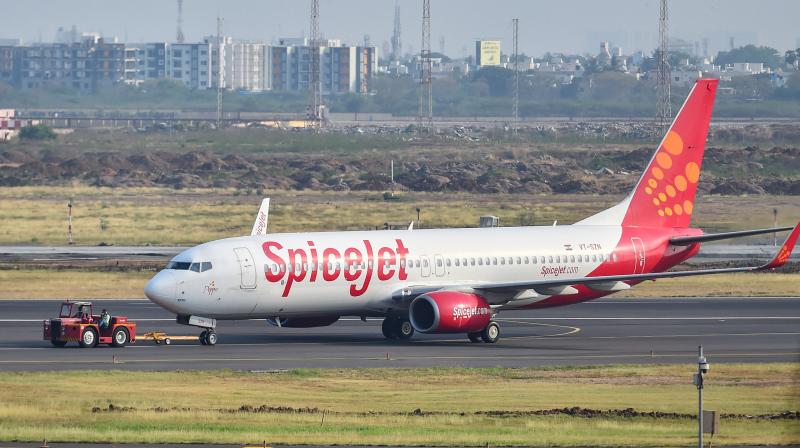 A SpiceJet statement also said it is committed to ensuring a safe operation for its passengers and crew. (Photo: PTI)

New Delhi: After eight malfunctioning incidents reported in the last 18 days, the aviation watchdog, the Directorate General of Civil Aviation (DGCA), on Wednesday issued a show cause notice to SpiceJet, raising concerns over safety matters. The DGCA notice says that various incidents from April 1 this year till date have been reviewed by it and it was found that "poor internal safety oversight" and "inadequate maintenance actions" have resulted in the degradation of safety margins. DGCA's audit of SpiceJet in September 2021 found component suppliers not being paid on a regular basis, leading to a shortage of spares.

Following the DGCA's notice to SpiceJet, civil aviation minister Jyotiaditya Scindia said passenger safety is paramount and "even the smallest error hindering safety will be thoroughly investigated and course-corrected."

"The reported incidents on aircraft operated by SpiceJet Limited from April 1, 2022 till date have been reviewed and it has been observed that at number of occasions the aircraft either tuned back to its originating station of continued landing or continued landing to the destination with degraded safety margins. Financial assessment carried out by DGCA in September 2021 has revealed that the airlines has operated on Cash and Carry and suppliers/approved vendors are not being paid on regular basis leading to shortage of spares and frequent invoking of MELs…It may be deduced that SpiceJet Ltd has failed to establish a safe, efficient and reliable air services under terms of Rule 134 and Schedule XI of the Aircraft Rules, 1937," the DGCA notice said while flagging technical snags.

On Wednesday, SpiceJet's Q400 plane conducted a priority landing in Mumbai after the windshield cracked mid-air, while a Spicejet Delhi-Dubai flight with 150 onboard made a precautionary landing in Karachi on Tuesday. Prior to that, a SpiceJet Q400 plane from Delhi to Jabalpur made a 'May Day' distress call and returned to Delhi after smoke was detected in the cabin. On June 19, a Delhi-bound SpiceJet aircraft, with 185 passengers on board, made an emergency landing in Patna right after take-off as its left engine caught fire following a bird hit.

Meanwhile, some other airlines too have reported incidents. On Tuesday, smoke was detected by the cabin crew in IndiGo's Raipur-Indore flight during taxing while a Bangkok-Delhi Vistara flight landed at Delhi on Tuesday on a single-engine.