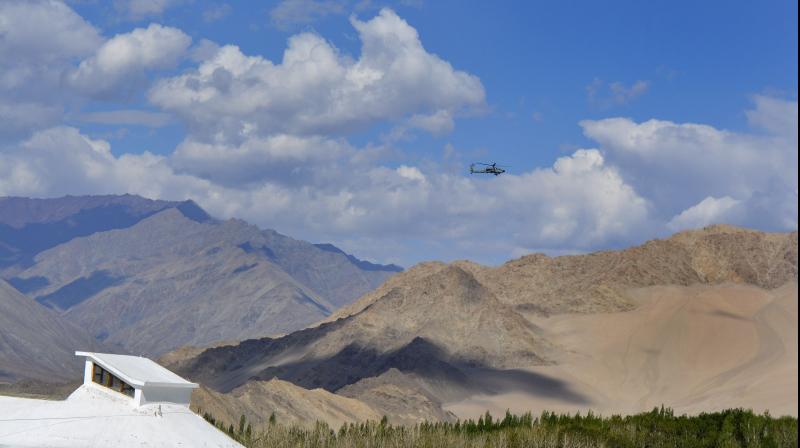 An IAF plane flies over Ladakh amid standoff between Indian and Chinese troops in Eastern Ladakh. PTI photo

“Disengagement with PLA has started as per agreed terms in the Corps Commander’s meeting,” said senior army officials.

Army sources said that Chinese soldiers were seen removing tents and structures at patrolling point 14 at Galwan Valley where on June 15 Indian and PLA soldiers were engaged in brutal hand-to-hand fight resulting in casualties on both sides.

“Rearward movement of vehicles of PLA seen at general area Galwan, Hot Springs and Gogra. Confirmation about distance of withdrawal will be only after verification,” said government sources.  According to sources as per the agreement between the Corps Commander a buffer zone of 1.5 kilometers on both sides of the LAC has to be created in these areas of stand-off.

Though Pangong Tso remains the most contentious issue between the two sides, sources said that even at finger 4 there was a marginal thinning of the Chinese troops.

The military commanders from both sides are in constant touch with each other and are reported to have spoken 3-4 times on Sunday.

Sources said that in Galwan Valley, the water level of the Galwan river has risen suddenly due to melting of snow, which could have forced Chinese to move from the area faster.

Indian army is reported to be using drone to verify Chinese movement as physical verification has been hindered by rising waters of Galwan river.

Chinese foreign ministry spokesman Zhao Lijian said on Monday both sides were “taking effective measures to disengage and ease the situation on the border”.

“We hope India will meet China halfway and take concrete measures to carry out what both sides agreed to, continue to closely communicate through diplomatic and military channels, and work together to cool down the situation at the border,” Zhao told a news conference.

However, India remains cautious and the army and air force are on a high alert.

Last week during the Corps Commanders meeting both sides had agreed that they would implement the June 6 agreement to move forces back at flash points in Galwan Valley,  Hot-Springs and Gogra Post. In the first stage both sides will move 2-3 kilometers, to create a buffer zone. In the later stages, troops are planned to move further back and ultimately reduction of the troops from depth areas too.  According to sources the new disengagement plan is a step-by step process where each step will be verified by India before taking the next. The dis-engagement will be a slow process which could take months.

China is reported to have deployed around 20,000 troops at the LAC on the Ladakh sector  with additional 12,000 troops  reserved in-depth areas which can reach LAC in 48 hours.  India has also done mirror deployment of its troops in Ladakh to counter the Chinese. India has also deployed tanks, heavy artillery and air defence system in the Ladakh sector to counter  any Chinese challenge.

It is to be noted that Chinese troops have started disengagement at a time when there has been an increase in China-US tensions. For the first time in six years, US Navy’s two aircraft carriers—USS Nimitz and USS Ronald—are carrying out exercises in the South China Sea in a show of its might and to push back China’s claim on the contested region. Each US aircraft carrier has over 60 aircraft and are escorted by missile cruisers, submarines and destroyers. Even B-52 bombers participated in the exercise flying directly from their airbases.