Ever since the start of July, the city on an average has reported 1,000 cases every day 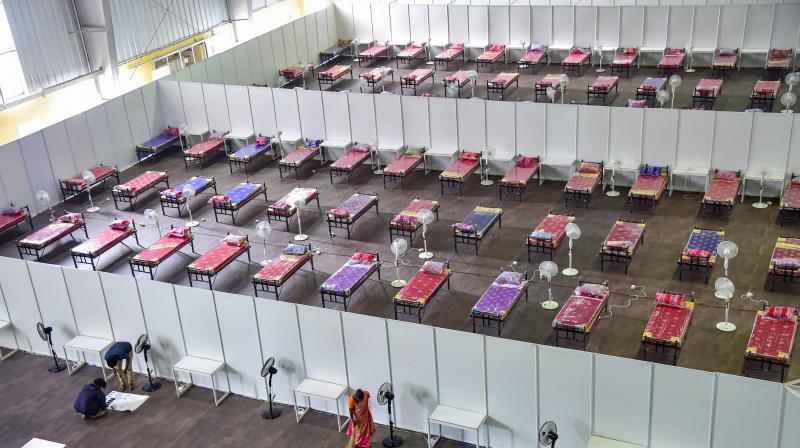 Bed lined at a temporary COVID-19 centre at BIEC in Bengaluru, as coronavirus cases rise across the state. PTI photo

A day after the government warned private hospitals of criminal if they denied treatment to Covid19 patients. The government cracked the whip and set an example by issuing notice to Apollo Hospital for over-charging.

While there were incidents of private hospitals over-charging the patients for Covid 19 tests, the government on Monday issued a show cause to Apollo Hospital which had charged Rs 6,000 when the government capped it at Rs 4,500. However, the hospital was quick to clarify that it has initiated the refund process and have revised rates as per government guidelines. The state has 14,385 active cases.

Ever since the start of July, the city on an average has reported 1,000 cases every day. In the past six days, it has contributed to 6,006 cases.

The state recorded 1,853 fresh cases, of which 981 are from Bengaluru. Sources claimed that Mandya MP Ms Sumalatha had also tested positive and was being given treatment at her JP Nagar residence and her son and cine actor Mr Abhishek is awaiting his result and has been isolated in the residence.

Bengaluru witnessed 10 deaths from Corona and Karnataka recorded 30 deaths. Medical education minister Mr Sudhakar revealed that the death rate in Karnataka is 1.58 percent and the city's rate was 1.51. He assured that everything was under control and citizens didn't have to panic.

Minister Mr Madhuswamy's statement that the community spread has begun in the state had turned into a topic of debate. However, there were no official confirmation on this neither by the COVID-19 incharge ministers nor the health department.