India   All India  07 Jul 2018  Will Nirbhaya rapists be spared from hanging? SC to decide today
India, All India

Will Nirbhaya rapists be spared from hanging? SC to decide today

Rape of 23-yr-old medical student, who came to be known as Nirbhaya, triggered public outrage across the country. 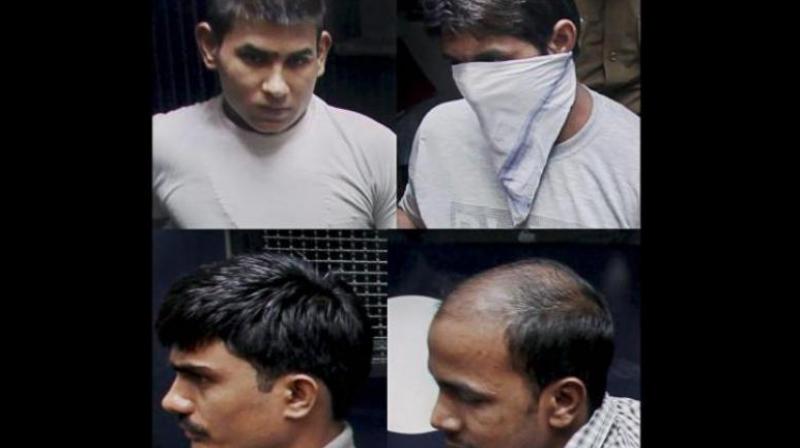 New Delhi: The Supreme Court on Monday will decided whether four men who brutally gangraped a 23-year-old medical student on a moving bus in Delhi on December 16, 2012 will have their death sentences reduced to life imprisonment.

The apex court will announce its verdict on the review petition filed by the convicts at 2 pm.

The Supreme Court had on May 5, 2017 upheld the verdict of the Delhi High Court and the trial court sentencing the four men - Mukesh (29), Pawan Kumar Gupta (22), Vinay Sharma (23) and Akshay Kumar Singh (31) to death for raping the woman, fatally wounding her and leaving her to die by the road.

The accused had then appealed to the court to review their sentences, saying it was "cold-blooded killing in the name of Justice". The court agreed to hear their request in November, 2017.

A bench of the Supreme Court led by Chief Justice Dipak Misra had heard the arguments of both the sides and reserved the order in May, 2018.

The brutal gangrape and killing of the 23-year-old medical student on December 16, 2012, triggered publice outrage and shock across India. It also led to major changes to laws on sexual crimes against women.

Of the six accused, bus driver Ram Singh killed himself in his prison. The youngest accused, just days short of 18 when he committed the crime, was sent to juvenile home.

After being treated at AIIMS, New Delhi, the woman was flown to Singapore for treatment where she died on December 29, 2012. After the incident, the woman came to be known as "Nirbhaya" or fearless. Her parents have said that all the rapists should be hanged, including the youngest.