Making an apparent reference to the 2016 surgical strike into PoK, he criticised the Congress for questioning the capabilities of the Army. 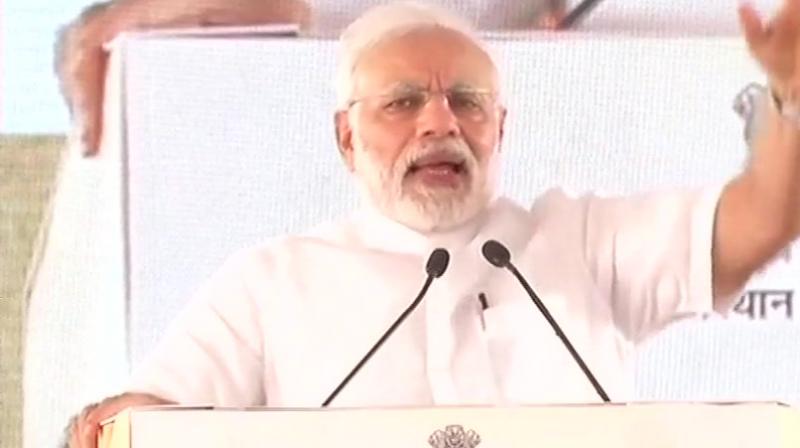 Modi was addressing a rally of beneficiaries of welfare schemes run by the Centre and the state government in Bharatiya Janata Party-ruled Rajasthan, where assembly elections are scheduled later this year. (Photo: ANI/Twitter)

Jaipur: Launching a scathing attack on the Congress, Prime Minister Narendra Modi on Saturday said the party is now being called a “bail gaadi” as several of its leaders are out on bail.

“Several leaders who are called stalwarts of the Congress and former ministers are out on bail these days,” Modi said at a public rally in Jaipur, punning on the Hindi term for a bullock cart.

He said people were well aware of the “intentions” of the Congress party and had started calling it a “bail gaadi”.

Making an apparent reference to the surgical strike into Pakistan-occupied Kashmir (PoK) in 2016, he criticised the Congress for questioning the capabilities of the Army.

“It is unfortunate that political opponents also committed a sin by raising questions on the capabilities of the Army. This has never happened before and the people will not forgive those who are doing this kind of politics,” he said.

The Prime Minister also said that his government had resolved the issue of one rank, one pension for defence personnel.

Appreciating the work of Rajasthan Chief Minister Vasundhara Raje, PM Modi said that she had changed the work culture in the state.

In this context, he took another dig at the opposition in the state, stating that, “There are some people who will never appreciate good work done, be it the Centre or Rajasthan Chief Minister Raje ji. Everyone must see the happiness of the beneficiaries here. There is a class that gets irritated with Prime Minister Modi's name and his work.”

“Never forget what the previous government left in Rajasthan,” he added.

Modi was addressing a rally of beneficiaries of welfare schemes run by the Centre and the state government in Bharatiya Janata Party (BJP)-ruled Rajasthan, where assembly elections are scheduled later this year. While addressing the audience, he reiterated that the BJP’s primary agenda was to bring about development.

“We have only one agenda and that is Vikas (development). The way the programme in Jaipur has been organised is commendable. Hearing beneficiaries are wonderful. Our aim is inclusive and all-round development," he said.

"The Central Government and the State Government are working together for the progress of Rajasthan,” he added.

The Prime Minister’s comments come after he laid the foundation stone for 13 urban infrastructure projects with a total worth of over Rs 2,100 crore rupees on Saturday. Around 2.5 lakh beneficiaries had gathered in Jaipur to take part in the programme. Rajasthan Governor Kalyan Singh, Chief Minister Vasundhara Raje, BJP state president Madan Lal Saini and other leaders attended the public meeting at 'Amrudon ka Bagh'.