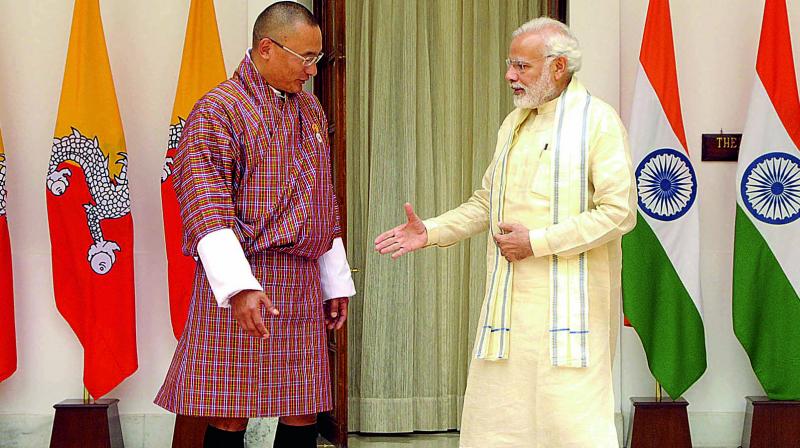 New Delhi: At a time when it is strengthening ties with China post-Doklam, New Delhi is also working steadily towards consolidating ties with Bhutan. While New Delhi’s ties with Beijing have subsequently improved vastly, New Delhi has stepped up its interaction with Bhutan through a series of high-level exchanges and development partnership apart from the strategic component in ties.

Visiting Bhutanese Prime Minister Dasho Tshering Tobgay on Friday held talks with Prime Minister Narendra Modi in the national capital on Friday during which the entire gamut of ties, including defence, security and strategic cooperation as well as the “development partnership” between the two neighbouring countries was understood to have been discussed.

India is furnishing massive assistance to Bhutan in the hydro power sector. New Delhi wants to do all it can for the economic development of Bhutan, at a time when China is undertaking economic development projects in several south Asian countries and boosting its influence.

In a statement, the MEA said, “PM Modi conveyed that India deeply values its development partnership with Bhutan. PM Modi reaffirmed that, as a friend and close neighbour, India will continue to partner with Bhutan in pursuit of its development goals, which is based on the priorities of its people. The two Prime Ministers reviewed the bilateral economic and hydro-power co-operation, including the progress in implementation of the on-going (Government of India) GoI-assisted-hydro-electric projects in Bhutan. They agreed that the robust partnership in the hydro-power sector was mutually beneficial. They reaffirmed their commitment to further strengthen collaboration in the hydro-power sector in the spirit of close friendship and co-operation that characterise relations between India and Bhutan.”

“PM Modi complimented the people and the Royal Government of Bhutan on its imminent graduation to a middle income country, and for achieving economic progress while preserving its traditions and values, and combining sustainable development with enhanced happiness quotient of its people,” the MEA said.  Bhutanese PM Tobgay too“thanked India for its “invaluable support and partnership for Bhutan’s socio-economic development”.

The Bhutanese PM is currently on a three-day visit to India.