The complainant said the trio and their supporters entered her house when no male member was present there. 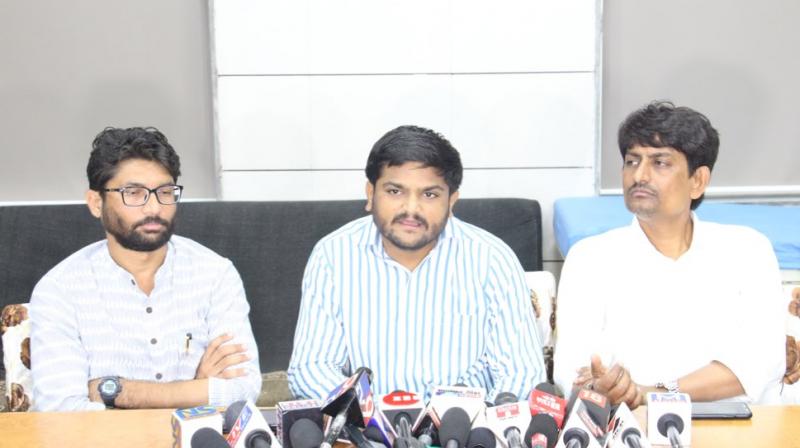 Thakor, a Congress MLA, along with independent legislator Mevani and Patel, on Thursday "raided" the house of a woman, identified as Kanchanben Makwana. (Photo: @HardikPatel_ | Twitter)

Ahmedabad: Patidar quota agitation leader Hardik Patel and Gujarat MLAs Alpesh Thakor and Jignesh Mevani were booked by police on trespass and other charges after allegedly leading a "raid" at a house where they claimed that liquor was illegally stored, an official said on Saturday.

Thakor, a Congress MLA, along with independent legislator Mevani and Patel, on Thursday "raided" the house of a woman, identified Kanchanben Makwana, with over a dozen supporters claiming they wanted to expose the alleged "liquor den" operating there.

The house is located near the office of Gandhinagar Superintendent of Police.

Makwana filed a complaint at the Gandhinagar Sector 21 police station.

The complainant said the trio and their supporters entered her house when no male member was present there.

"They even planted two pouches of country-made liquor there to prove her house was a liquor den," Makwana was quoted as saying by inspector VN Yadav.

"Makwana, in her complaint, said she does not sell liquor and the two pouches recovered from her house were planted by the people who entered her home," Yadav said.

He said an FIR was lodged against Thakor, Mevani and Patel besides over a dozen others under various section of the Indian Penal Code including for house-trespass after preparation for hurt, assault or wrongful restraint (452), intentional insult with intent to provoke breach of the peace (504), and intentionally giving false evidence (193).

Yadav said no arrest has been made so far in the case.

Gujarat has a law in force since 1960 that bans manufacture, storage, sale and consumption of alcohol.

Taking to micro-blogging site Twitter, Patel alleged that the "liquor mafia" can do anything in Gandhi's Gujarat, with the police and the ruling BJP giving them support.

The three leaders "raided" Makwana's house at Adivada village after meeting four people who were hospitalised after allegedly consuming spurious liquor in Ahmedabad.

Thakor, who has led anti-liquor agitations in the past, said the aim of the "raid" was to expose the police and the government's "inaction" to curb alcohol menace in the state.

The three leaders had taken on the BJP in the Gujarat assembly elections held last year.