For OBC votes, BJP puts up with unruly Rajbhar

Cabinet minister and SBSP chief O.P. Rajbhar has been challenging his alliance partner BJP to throw him out of the Yogi govt. 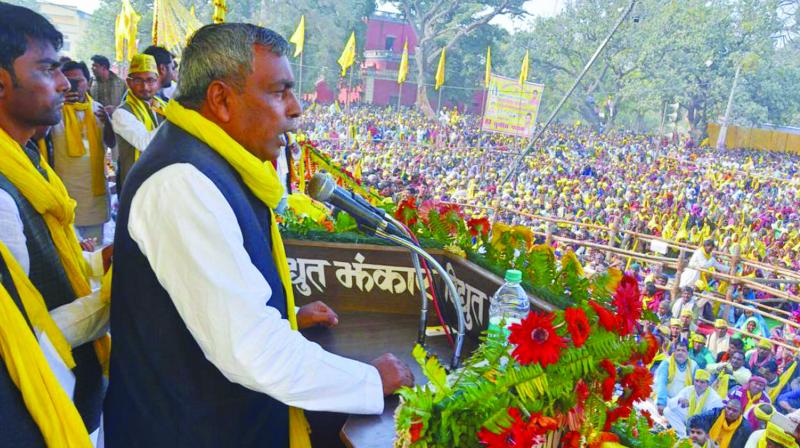 Uttar Pradesh Cabinet minister Om Prakash Rajbhar, who heads BJP ally  SBSP, is a constant source of embarrassment for the Yogi Adityanath govt due to his tantrums and  open challenge to kick him out of the alliance.

Lucknow: Rarely ever before has Uttar Pradesh politics seen a tantrum- thrower like Om Prakash Rajbhar, a Cabinet minister in Yogi Adityanath government who has been declared an “attention-seeker” by his own Cabinet colleagues.

The politician, who heads the little known BJP-ally Suheldev Bharatiya Samaj Party (SBSP) hat has only four MLAs in the state Assembly, has become a constant source of embarrassment for the Yogi government and has been badgering the BJP at an alarming frequency with his statements and actions.

He has also not missed any opportunity to support anti-government issues raised by the Opposition parties and  challenging the saffron party to throw him out of the Yogi government.

Surprisingly, the BJP, despite having an overwhelming majority on its own in the Assembly, is quietly tolerating his antics rather than severing ties with him as it does not want to upset the Rajbhar community and other dalit and OBC voters.

The BJP’s patience is going to be put to test yet again as the SBSP, according to sources, is preparing to demand at least 24 seats out of the 80 seats for the Lok Sabha in 2019. An aide of Mr Rajbhar said that if the BJP does not agree, the party will field its candidates on all 80 seats.

In the latest challenge to the BJP, Mr Rajbhar, the minister for backward classes welfare and disabled people development, has warned to launch an agitation if the BJP does not implement reservation within reservation policy, earmarking quota for the most backward castes within the OBC quota, by October.

Mr Rajbhar, however, defends his behaviour and says, “I call a spade, a spade. I am a straightforward person whether anyone likes it or not. My accountability is towards my community which has made me a leader”.

Mr Rajbhar, who earlier had a brief fling with V.P. Singh’s Jan Morcha in 2005, struck a discordant note within two months of becoming minister when he announced that he would stage a dharna to seek the removal of the then district magistrate of Ghazipur Sanjay Khatri for allegedly not giving him due respect.

In his attention-seeking statements, he often ends up contradicting himself. For instance, he demanded prohibition and then talked about his community and says,  “what BJP spends in one month in running its party is equal to what members of the Rajbhar community spend on consuming liquor in one day.

He alleged that Yadavs and Rajputs were alcoholics - a statement that led to demonstrations outside his official residence in Lucknow.

More recently, the legislator from Zahoorabad crossed all limits of decency when he termed a BJP MLA as a “kutta (dog)” when the latter objected to his meeting with Samajwadi Party leader Shivpal Yadav.

Mr Rajbhar also plays the OBC card to the hilt. Recently, he declared that the Modi government would not return to power if it did not accord respect to OBCs. He also justified use of money and muscle power in elections.

The BJP, meanwhile, has steadfastly avoided reacting or commenting on Mr Rajbhar’s antics and, if sources are to be believed, the party would prefer that he leaves the alliance on his own rather than showing him the door.

“Reacting or snubbing Mr Rajbhar would make him a hero in his community. He is welcome to move out if he wants. Everyone knows by now that he is an attention-seeker and when he does not get attention, he indulges in theatrics,” said a veteran BJP leader.

Mr Rajbhar is the self -proclaimed head of the Rajbhar community that constitutes 2.6 per cent of the state’s population and has a presence in about 42 Assembly constituencies.

The BJP, apparently, feels that its dalit and OBC outreach would receive a jolt if it takes action against Mr Rajbhar.

“We do not wish to be seen as anti-OBC on the eve of Lok Sabha elections. We have told all our leaders not to react to what Rajbhar does or says. We are also aware that Rajbhar has been hobnobbing with opposition parties and if he wants, he is welcome to join them,” a senior Cabinet colleague of Mr Rajbhar said.

The BJP has also gradually started promoting other leaders of the Rajbhar community in the party.