Barsirhat and Baduria in North 24 Parganas in West Bengal have been witnessing violence following an ‘objectionable’ post on Facebook. 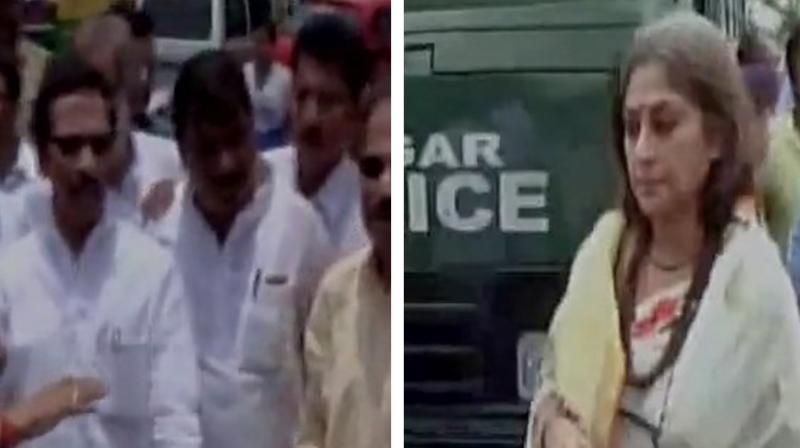 Leaders of BJP, Congress and Communist Party of India (Marxist) were stopped on Friday from entering the violence-hit Basirhat.

Barsirhat and Baduria in North 24 Parganas in West Bengal have been witnessing violence since Monday following ‘objectionable’ post on a social networking site Facebook.

Several shops were torched and houses ransacked in Baduria, Tentulia and Golabari following the clash after which the Centre has imposed Section on Wednesday.

Police arrested BJP leaders Roopa Ganguly and Locket Chatterjee near the Kolkata airport when they insisted on proceeding to Basirhat, around 12 km from violence hit area in Bashirhat.

CPI(M) MP, Mohammed Salim, who was leading his party delegation to Basirhat in West Bengal on Friday, was stopped 50 kilometers before entering the violence-hit area.

Heavy security forces have been deployed in and around the area.

Mohammad Salim said, "The situation in Basirhat has become critical. The state government could not fulfill its responsibility and hence it has become a riot affected area."

"Chief Minister Mamata Banerjee would have approached to convert the situation into a normal status. But she was too busy in personal quarrel with the governor," he added.

He further said that he expects Chief Minister Mamata Banerjee to take some serious steps against the situation and warn people who were involved in the riots.

"Some people are trying to control the situation and bring back the situation to a normal state. We are also trying to provide safety to the common people," he concluded.

On Monday night, the Baduria Police Station was attacked and set ablaze.

The Centre has rushed 400 paramilitary personnel to Baduria to bring the situation under control. The government has also suspended Internet services in the area, so that rumours are not spread.

Four companies of the Border Security Force (BSF) have been deployed at Baduria, Swarupnagar and Degangatame to tame the communal tension.

Meanwhile, the main accused, who allegedly posted objectionable material on Facebook on Sunday, was arrested on Monday morning and remanded to the police custody for four days.

However, this didn't calm down the members of the protesting community and they resorted to violence and torched the home of the accused.

On Tuesday evening, protestors torched police and government vehicles. Superintendent of Police (North 24 Parganas) Bhaskar Mukherjee was also injured when an angry mob attacked him and torched his vehicle.

West Bengal Chief Minister Mamata Banerjee has appealed the warring groups to maintain peace and communal harmony in the area. She also held the local police responsible for failing to block Facebook in the beginning only.