The body of the girl was found in a garbage dump on Sunday. 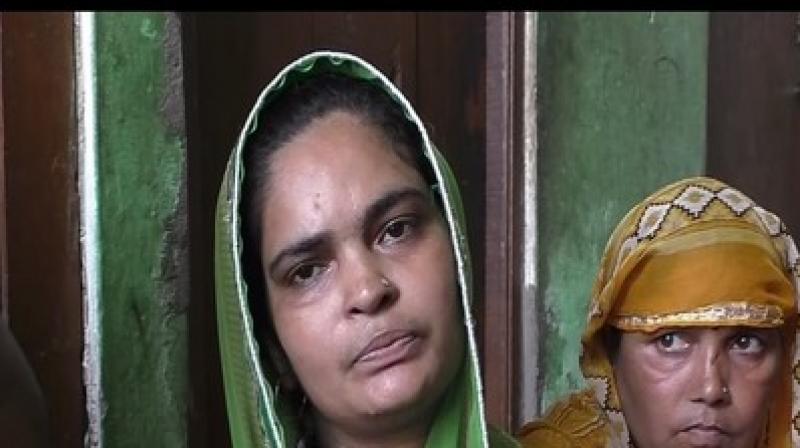 A postmortem was conducted under the supervision of a three-doctor team which confirmed that she was strangulated but ruled out the possibility of rape, the police said. (Photo: ANI)

Aligarh: Shilpa Sharma, mother of the two-year-old Twinkle, who was brutally murdered in Aligarh, on Friday urged Prime Minister Narendra Modi and Uttar Pradesh Chief Minister Yogi Adityanath to serve justice to her daughter by hanging the accused.

The body of the girl was found in a garbage dump on Sunday. Two persons, Zahid and Aslam, have been arrested for killing the child in Tappal area of the city. Police said that on June 5 the girl was abducted and killed in a revenge crime over a financial dispute her father had with Zahid. A postmortem was conducted under the supervision of a three-doctor team which confirmed that she was strangulated but ruled out the possibility of rape, the police said.

"The girl went missing on May 30 from our relative's home. We searched every street in the area, but could not find her. Later, we got to know about her on May 2. The sweepers told us about the body when we saw it, then we got to know that it was our child. When we saw the body, one of her hand was missing and her eyes were burnt with acid (tezaab). Even her legs were fractured. We don't know why they did this to her. We want the police to arrest the family members of the accused. We want justice," the victim's mother told ANI here.

"I want the Prime Minister Narendra Modi-led central government and Yogi Adityanath-led state government to serve her justice in a manner that the world sees it. They should hang them," she added.

Asked to share details about the matter, Shilpa said, "He (Zahid) had taken Rs 10,000 from us for his father's treatment. My father-in-law had given it to him and when he asked him to pay back, Zahid denied taking any amount. Later, he even challenged my father-in-law. We had no clue that he would do anything like this."

Not only about Zahid but Shilpa also revealed shocking details about Aslam, the other accused in the case.

"Aslam had raped his own four-year-old daughter. Since then his wife is staying at her parents' house with their daughter," she claimed.

Shilpa's mother-in-law has also demanded justice for her granddaughter.

"We want justice. With folded hands, I request to hang the victims. The condition of the child was so bad, that I couldn't even see her," she said.

The brutal murder triggered a deluge of reactions on social media with hashtags demanding justice for the girl trending on Twitter.