Swaraj, who is in South Africa on a five-day visit, also inaugurated the 2-sided bust of Gandhi, called the 'Birth of Satyagraha'. 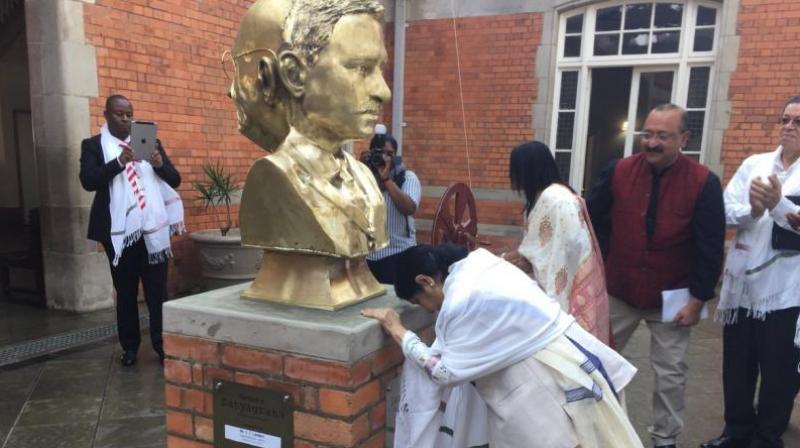 Pietermaritzburg/New Delhi: External Affairs Minister Sushma Swaraj on Thursday undertook a train journey from Pentrich to Pietermaritzburg, a railway station in South Africa where a young Mahatma Gandhi was thrown out of a "whites-only" compartment 125 years ago, an incident that acted as a catalyst for him to practice Satyagraha.

Swaraj, who is in South Africa on a five-day visit, also inaugurated the 2-sided bust of Gandhi, called the "Birth of Satyagraha".

The bust "acts as a constant reminder, to all of mankind, of the momentous moral journey that young Mohandas Karamchand Gandhi undertook," Ministry of External Affairs spokesperson Raveesh Kumar tweeted.

"To practice this belief of 'Vasudeva kudumbakam' (the world is one family) we need to keep reminding us that Truth and Non-violence is the way," said Swaraj in her address at the event.

His journey between Pentrich to Pietermaritzburg acted as a catalyst for Mahatma Gandhi to practise satyagraha, Kumar said.

"125th anniversary of the Pietermaritzburg incident, 100th Birth Centenary of Madiba (Nelson Mandela) and 25 years of the diplomatic relations. It couldn't get bigger," Kumar tweeted.

On the night of June 7, 1893, Mohandas Karamchand Gandhi, a young lawyer, was thrown off the train's first class compartment at Pietermaritzburg station for refusing to give up his seat. The incident led him to develop his Satyagraha principles of peaceful resistance and mobilise people in South Africa and in India against the discriminatory rules of the British.

Tambo was a South African anti-apartheid politician and revolutionary who served as President of the African National Congress from 1967 to 1991. Upadhyaya was an Indian thinker and co-founder of the political party Bharatiya Jana Sangh.

Later, 20 diaspora youth from Africa and five from India answered a question "What was the Turning Point Moment in Your Life?" in the form of an essay for a competition. Winners were felicitated by Swaraj.

Gandhi spent 21 years in South Africa before returning to India in 1915.