India   All India  07 Jun 2018  No BJP, Shiv Sena will contest all upcoming polls on its own: Sanjay Raut
India, All India

No BJP, Shiv Sena will contest all upcoming polls on its own: Sanjay Raut

'Shiv Sena has passed resolution to contest all upcoming elections on its own. There will be no change,' says Sanjay Raut. 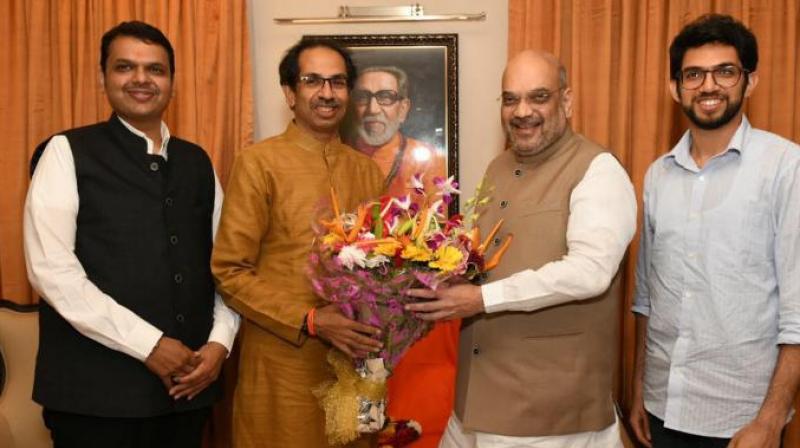 Mumbai: In less than 24 hours following a two hour meeting between BJP President Amit Shah and party's ally in Maharashtra Shiv Sena's chief Uddhav Thackeray, Shiv Sena today continued with their stand of going solo in all the upcoming polls including the 2019 general elections.

"We know what the agenda of Amit Shah ji is but Shiv Sena has passed a resolution that we'll contest all upcoming elections on our own. There will be no change in that resolution," senior Shiv Sena leader Sanjay Raut told on Thursday.

Though Amit Shah asserted that the two (BJP and Shiv Sena) would contest the 2019 Lok Sabha elections together, the decision of Shiv Sena after the meeting at Udhav Thackeray's Mumbai's residence ‘Matoshree’ has foiled all hopes for BJP.

After the meeting, which was a part of BJP’s ‘Sampark for Samarthan’ programme, Amit Shah had said the meeting was “positive” and the two would contest “not only 2019 polls, but also 2024 polls together”.

Assembly election in Maharashtra is slated for 2019 while the Lok Sabha elections are also few months away from now.

Sanjay Raut also asserted that the BJP and Shiv Sena are going to meet again in a couple of days.

In the recent past, differences have cropped up in the BJP-Shiv Sena alliance in Maharashtra, where Sena has attacked BJP, and has expressed its anger towards the party with its strong worded editorial in its mouthpiece ‘Saamana’.

The meeting betweem Amit Shah and Uddhav Thackeray on Wednesday which had hinted at things turning around has now left several question marks after Sanjay Raut’s statement.

BJP president Amit Shah, who was in Mumbai on Wednesday, had a busy schedule. As a part of BJP’s ‘Sampark for Samarthan’ or outreach programme, Amit Shah met actor Madhuri Dixit, industrialist Ratan Tata and also visited the Siddhivinayak temple.