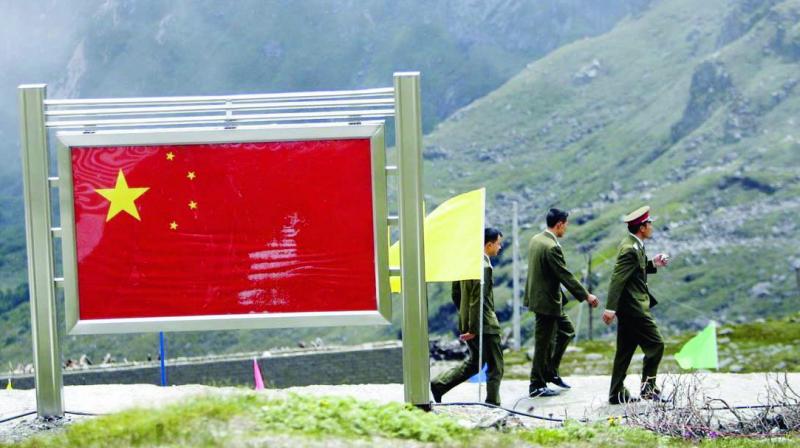 The Chinese government has sent in a huge army of gold diggers and mining machines to Lhunze, a remote and inhospitable location in southeast Tibet . (Photo: AFP)

New Delhi: For hundreds of years, the Sonowal community of Assam — gold washers by tradition — has strongly believed that the river Subansiri (subarna meaning gold, siri meaning flow) in Assam and Arunachal Pradesh which originates and flows in from across Shannan Prefecture in Tibet passes through an area of rich gold fields in the north.

The recent detection of a huge reserve of gold in Tibet’s Lhunze county across Arunachal’s upper Subansiri district — valued at about $60 billion — is a vindication of that very old legend.

It has also set off a gold rush in Tibet’s Lhunze county just across Arunachal Pradesh’s upper Subansiri district. Not surprisingly, the Chinese government has sent in a huge army of gold diggers and mining machines to this remote and inhospitable location in southeast Tibet and has undertaken the mining project on a mega and unprecedented scale.

Dr Dharmeshwar Sonowal, director (archives), Assam government, and a leading researcher in the history and folklore of the Sonowals, told this newspaper: “The Chinese find is a vindication of our belief and veracity of our legend.”

“The Sonowals were the traditional gold miners on the Subansiri. Our history and oral tradition talk about the methods and ways of acquiring the gold from the river sand. We had a very strong legend that the Subansiri flowed through a field of huge gold reserves somewhere upstream. There are even Bihu songs about gold in the Subansiri,” he added.

The Sonowals, to which present Assam chief minister Sarbananda Sonowal, also belongs, are believed to have descended from a clan called “Badu-suno-loi” which formed itself into a gold trading guild called “Sonowal khel”.

There are written historical accounts of the Sonowals having supplied gold to the powerful Ahom kingdom in Assam, which resulted in a wide range of gold coinage and helped the dynasty rule uninterruptedly for about 600 years till 1826.

At its origin, the river is known Tsari Chu, which flows across the Shannan Prefecture region which includes the country seat and township of Lhunze.

Tsari Chu flows down a few kilometres before entering Arunachal Pradesh. It then flows for about 500 km before merging with the mighty Brahmaputra near Assam’s Lakhimpur district, which has been the traditional home to many communities in Assam, including the “Sonowal Kacharis” that inhabited the foothills along the present-day Assam-Arunachal border.

Interestingly, last week, Chinese foreign ministry spokesperson Lu Kang again underscored his country’s position on the report of the mega mining activity in Lhunze. “The area mentioned by the report totally belongs to China... China conducts regular geological and scientific research on its own territory. It is completely within China’s sovereignty,” he said during a regular media briefing.

The spokesperson’s response was in reaction to international media reports, which said China’s mining foray in an area so close to Arunachal Pradesh was part of an ambitious plan by Beijing to reclaim “South Tibet”.

China claims Arunachal Pradesh as its territory and calls it South Tibet, a claim Indian strongly disputes. The reports also said that China’s moves to lay claim to the region’s natural resources while rapidly building up infrastructure could turn it into “another South China Sea”.

Lhunze was also in the news last year when Chinese President Xi Jinping in a rare letter had coaxed a Tibetan family to settle down in the area and safeguard “Chinese territory” and develop their hometown.