India   All India  07 May 2019  'Something is fishy': BCI on sexual harassment charges against CJI
India, All India

'Something is fishy': BCI on sexual harassment charges against CJI

The three-judge committee constituted to probe the allegations of sexual harassment against CJI Gogoi has cleared him of the charges. 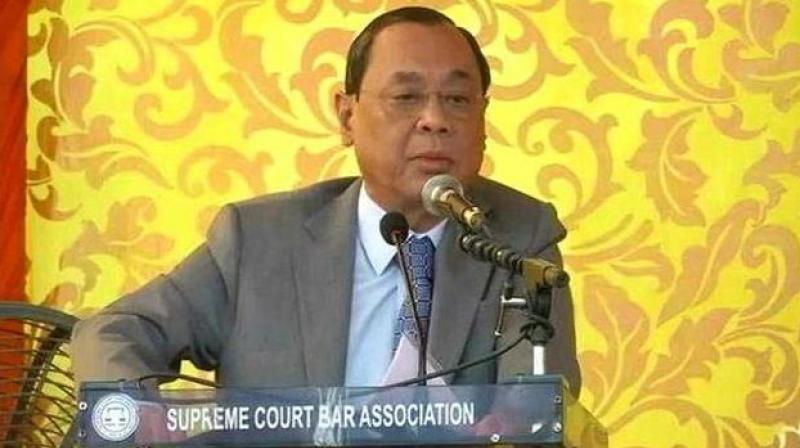 The Bar Council of India (BCI) has opined that there was 'something fishy' in the sexual harassment allegations levelled by a former employee of the Supreme Court against Chief Justice of India (CJI) Ranjan Gogoi. (Photo: File)

New Delhi: The Bar Council of India (BCI) has opined that there was "something fishy" in the sexual harassment allegations levelled by a former employee of the Supreme Court against Chief Justice of India (CJI) Ranjan Gogoi.

In a statement directed to members of legal fraternity, judges and people of the country, the BCI claimed that there was some very strong support behind the complaint against the CJI.

"The common man of the country is not a fool. Mass was/is realizing that there was/is some very strong backing/support behind the complaint against Chief Justice of India and complainant was/is not at all a simple lady," the BCI chairman Manan Kumar Mishra stated on Monday.

Throwing light on the incident, the BCI said, "If you examine the complaint and the annexures and see the way facts are narrated; the manner in which she claims to have recorded everything in her mobile while at police station, and the way she has been dealing with police, the Courts, CBI, IB, everyone; If one analyses these things carefully, you will find something fishy."

The council further said that one should not doubt the decision of three-judge in-house Committee of the Supreme Court, which on Monday gave a clean chit to CJI Gogoi in the sexual harassment complaint allegation against him.

"The Committee has taken the decision after examining the materials and everything carefully; it has adopted the right procedure, which was required in this case. We should not doubt the decision of our three Judges of the committee, otherwise, it will send a very wrong signal and there shall be no end to such malicious complaints against the responsible authorities/persons discharging important functions," the BCI said.

It further informed that the complainant did not opt to lodge an FIR against the CJI in the matter.

"Before questioning the validity of probe by in-house Committee of three Judges, we should not forget that the lady (Complainant) had approached and lodged her complaint to the Judges of Supreme Court only; she did not opt to lodge a complaint or FIR. She herself has opted this forum and the Judges have decided to hold an in-house inquiry on her complaint before them. Even Supreme Court Bar Association had proposed for holding an in-house inquiry," the BCI said.

The three-judge committee constituted to probe the allegations of sexual harassment made by the complainant against CJI Gogoi has cleared him of the charges.

The committee has concluded that there is no substance in the allegations of the former employee of the Supreme Court.

As the news broke and set off a storm about the complaint, the Chief Justice had called an extraordinary sitting of a bench headed by him and called the allegations a big conspiracy against him. The bench also passed remarks debunking the complainant.

Later, the court constituted a three-member Committee consisting of Justices Bobde, NV Ramana and Indra Banerjee. Justice Ramana recused from being a part of the committee after the complainant sought his recusal saying he was close the CJI. Justice Indu Malhotra replaced Ramana.

However, the constitution of the committee came under criticism with a number of jurists and lawyer including women advocates' saying the probe panel was not in accordance with the Visakha guidelines propounded by the apex court on the basis of which parliament had also passed a law.

Meanwhile, the woman complainant appeared before the three-judge panel and later walked out of it saying she was denied assistance of a lawyer or a "support person" to help her in presenting her case as she was not a legal person.

With the procedure adopted by the Committee attracting criticism, Justice DY Chandrachud of the Supreme Court wrote to the judges in the Full Court to "remedy all the grievances" which led the woman complainant to withdraw from the probe on April 30.

The woman who came out with the allegation a fortnight ago said her complaint was in the form of an affidavit sent by her to the judges of the SC on April 19. "I am alarmed at the conclusion arrived at by the in-house Committee, as my accusation of sexual harassment at the workplace and the consequent relentless victimization and reprisals against me and my family, are substantiated by documents and are verifiable."

She said on April 26 she had joined proceedings of the in-house committee and from the very beginning expressed serious concerns and reservations "that the manner in which the proceedings were being conducted would not mitigate the stark asymmetry of power between me and the CJI."

"On 4th May 2019, at about 8 pm I received a hard copy of my statements recorded before the In House Committee on 26th, 29th and 30th April 2019. On 6th May 2019, at around 10.30 am, I submitted corrections of some inaccuracies in my recorded statements, to the concerned registrar at the Supreme Court."